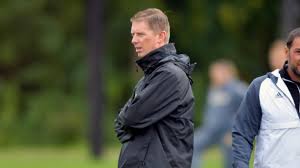 When it comes to confidence, new Seton Hall men's soccer head coach Andreas Lindberg is brimming with it and deservedly so.  Lindberg comes to Seton Hall after serving as the head coach at Division II LIU-Post for nine productive seasons during which the Pioneers were 139-30-15 overall including an 18-1-2 record in 2017.

Under Lindberg's direction,  LIU Post earned eight East Coast Conference (ECC) regular season titles, six tournament titles, seven berths in the NCAA Tournament, and advanced to the NCAA Tournament quarterfinal round three out of the past four seasons. Lindberg was named the ECC Coach of the Year six times including the 2017season and was a three-time United Soccer Coaches East Region Coach of the Year.

Lindberg has been part of soccer in the United States since being recruited from his home country of Sweden to play college soccer at LIU Southampton in 1998.  For Lindberg the transition from player to coach came seemingly easily.  He became the head coach of at LIU Southampton just three months after he graduated and  quickly transformed the program into a conference powerhouse.  He followed that with stints with the New York Hampton Surf and the Met Oval Development Academy in Brooklyn before becoming the head coach at LIU-Post.

Once a perennial power in the Big East Conference, Seton Hall has struggled over the last few seasons.  The Pirates were 6-10-1 overall last year,  4-11-2 in 2016, 0-15-1 in 2015 and  5-7-5 in 2014. The last time Seton Hall earned a berth in the NCAA Tournament was 2005. This no doubt contributed to a change in the guard and the decision to bring Lindberg to South Orange – with the mission to return Seton Hall to its former glory in the conference and the NCAA Tournament.

Lindberg now faces the daunting challenge of replicating the success that he had at the Division II level at Seton Hall. The level of competition from top to bottom in the Big East will be a step up from the East Coast Conference, but don't expect Lindberg to be intimidated.

Transforming the fortunes of a struggling Seton Hall side in the Big East will not be easy. Rebuilding in the highly competitive Big East Conference will not occur overnight.  Transformation will involve a bit of a change in mentality and a tremendous amount of hard work – something Lindberg has every intention of doing.

Lindberg took the first step forward by bring on board two assistant coaches who can help him turn the program around.   Jeff Matteo and Victor Munteam have joined the program as assistant coaches. Matteo is no stranger to the Big East. The former All-American and Big East Midfielder of the Year at St. John's, who also served as an assistant coach for eleven seasons at his alma mater, brings a wealth of experience. Matteo has recruited and developed countless student athletes including the likes of United States Men's National Team member Tim Parker.

Munteam comes to South Orange as a former goalkeeper and three-year assistant coach at LIU Post under Lindberg. His resume as a player includes four-straight NCAA Tournament appearances.

The next step is the addition of a talented recruiting class.

What should the Seton Hall faithful expect of Seton Hall under Lindberg and his staff?  Rebuilding is a process not an event so the answer to that question may be different in year two and three than in year one of the Lindberg era.  Nevertheless, expect an exciting brand of soccer that includes an organized approach on the defensive side along with an attack-minded offense that encourages creativity.

While Lindberg likes attack-minded soccer that is attractive to watch, he also knows that developing a winning culture and buy in requires incremental success that can be built upon.  He stated, "I like to play good and attractive soccer, but I like to win more."