Five Of The Most Underrated Players In College Soccer 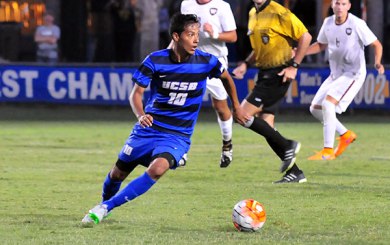 All college soccer fans know the big names in college soccer; Adam Najem, Miles Robinson and Jackson Yueill amongst others, but there’s plenty of players who fly under the radar that deserve just as much praise. MLS team’s scouts watch games across the country looking for hidden gems to help bolster their squads and we’ve made a list of some of the top talents that they should be keeping an eye out for.

With the 2016 regular season coming to a close in the next couple weeks, here is College Soccer News’ annual list of the most underrated players in the country.

Josue España (UC Santa Barbara): The first player on the list, España (1g,7a), is the senior playmaker for a talented Gauchos squad.

España, a First-Team All Big West pick in 2015, is a major reason why Santa Barbara has been fairly successful this year. The St. Benedicts Prep product is one of the best creators in the nation and has the ability to pick out a penetrating pass to beat backlines. Add that with two top forwards in Nick DePuy (6g, 2a) and Ahinga Selemani (6g, 2a), it’s no surprise he’s leading the conference in assists.

This season has been up and down for the Gauchos, but when España is in form and running the show,  the whole offense runs more smoothly.  The California native has the mentality, technique and soccer IQ for the next level, it’s just a question of whether an MLS team will deservedly give the young man a shot.

Harry Cooksley (St. John’s): The next player on the list, Cooksley (4g, 6a), a junior midfielder/forward was an unknown commodity prior to this season.  The Division II transfer hailing from London, England has played a major part in the Red Storm’s resurgence this year, thus far.

The 6’2”, 200 LBS playmaker is built like a linebacker, but is as elusive and technical as they come on the pitch.  Cooksley, capable of playing in any attacking position has all that you look for in an attacker.  He uses his frame well, has a quick burst of pace and superb vision to pick out his teammates.

The junior still has another year in college soccer to polish his game, but don’t be surprised if Cooksley is one of the first names taken off the MLS draft board in 2018.

Lucas Stauffer (Creighton): Stauffer (1g, 2a), a junior defender is one of the most pivotal pieces to a free flowing Blue Jays side, that often has excellent players in possession.

The left back has a great first touch, a quick acceleration and reads the game very well, which allows him to push up the field and join the attack.  Stauffer has played with the U.S. Futsal National Team and you can tell by the way he uses the soul of his feet, and his movements off the ball. The diminutive defender combines well with his midfielders and has great recovery speed to get back if he gets lost in possession.

The Preseason 1st Team All Big East honoree unfortunately could get overlooked by MLS scouts due to his stature (5’6”, 160 LBS), but he shouldn’t as he has all of the intangibles to succeed at the next level.

Handwalla Bwana (Washington): Bwana (4g, 4a), a freshman midfielder is already one of college soccer’s most electric players.

The Kenyan native is one of the top dribblers in the country and at any moment can take over a game.  The Huskies playmaker has great 1v1 ability and is one of those rare players who seem to be even faster with the ball.

Speaking on Bwana, Huskies Head Coach Jamie Clark said, “He has the talent to be one of the best players ever to play at UW, as his skill set that is second to none.” That’s high praise from someone who’s coached the likes of CristianRoldan and Darwin Jones.

If Bwana can continue his on-field growth and refine parts of his game, the Seattle Sounders will be begging their Homegrown product to sign for the first team.

Adam Wilson (Cincinnati): The final player on the list, Wilson (3g, 10a), a sophomore midfielder out of Scotland is one to keep an eye on over the next few years.

The Rangers FC Academy product leads the NCAA in assists (10), a year after notching 8 assists in his freshman campaign.   Wilson, a free kick specialist and the Bearcats’ #10, has a knack for finding the ball in good areas of the pitch and always looking forward to break pressure.

The American Athletic Conference All-Rookie honoree, is also deceptive off the dribble and equal with both feet.  Wilson has an outside chance of earning a Generation Adidas contract this year, but regardless he’ll be one of the top prospects in the years to come.

Ben Roth is a contributing writer for College Soccer News. He can be reached at Ben.rothpda16@gmail.com