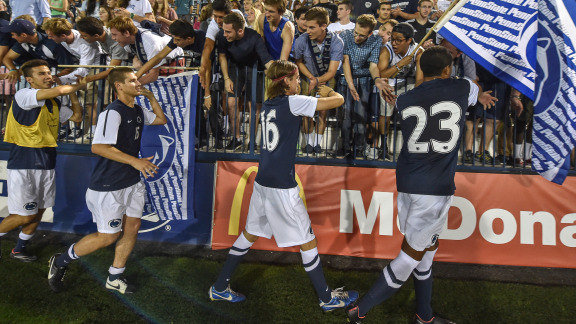 Penn State's 10-0-1 start to the 2014 season is the best for the program since the 1972 season when the Nittany Lions came out of the gate with a 9-0-2 record.  So far Penn State has been impressive on both sides of the ball scoring twenty-one goals to date while allowing only three.  Connor Maloney is leading the Nittany Lions and the Big Ten in scoring with eight goals to date.  Penn State has recorded nine shutouts in eleven contests.  Veteran Nittany Lion goalkeeper Andrew Wolverton has notched eight shutouts so far this season to up his career shutout total to thirty-one.  Wolverton also ranks second nationally in 2014 with a 0.21 goals-against-average.

Charlotte has now won eight consecutive games including a 1-0 on the road win Tuesday night over Clemson since an early season loss to Coastal Carolina.  The Forty-Niners are talented but they also again look to be one of the most fit teams in the country as reflected in the fact that they have outscored their opponents fifteen to one in the second stanza of play.  After the win over Clemson, Charlotte head coach Kevin Langan reflected the mettle of his team when he stated, "I am so proud of the effort from our guys every single one of them left it all on the field."

Syracuse has won ten of its first eleven contests to become the first team in the history of the program to do that.  Ian McIntyre is now in his fifth season as the head coach at Syracuse. Prior to the McIntyre era, there were a few seasons in which the Orange came out of the gate strong but with misleading cup cake wins.  Not so anymore, Syracuse is for real with wins to date over Virginia and Clemson and their lone loss a 1-0 setback to Notre Dame.  The defense at Syracuse which is anchored by goalkeeper Alex Bono never rests. To date the Orange has only allowed two goals in route to recording a 10-1-0 overall record with a 3-1-0 mark in ACC play.  Emil Ekblom leads a potent Syracuse offense with six goals including five game winners.  Syracuse has dangerous matches coming up against Wake Forest at home and Connecticut and Louisville on the road.

Connecticut entered the 2014 season with high hopes but to date their performance has been well below expectations with a 2-5-1 overall record.  In the past when the Huskies struggled on the offensive side of the ball they made up for it with lock down defensive play.  So far this year Connecticut has  allowed a total of 13 goals including allowing Coastal Carolina,  Washington, and St. John's to put three in the back of the net.  Last year Connecticut allowed a total of only seventeen goals and didn't allow anyone to score three on them.  In fact, they allowed two goals only once last year and that was in a game they tied.  Don't count Ray Reid's squad out of it just yet but clearly they face an uphill battle.

UNCW lost a heartbreaker 1-0 to Delaware in their 2014 CAA conference opener but the Seahawks have been stellar overall with an 8-2-1 record that includes signature non-conference wins over Duke and North Carolina out of the ACC and Old Dominion out of Conference USA.  Senior midfielder Jamie Dell has six goals including four game winners to lead the UNCW attack.

Oregon State has played well at times in the past but they have never really been able to turn the corner in Pac-12 play.  After beginning the year with a 7-1-0 record it looked like more of the same when the Beavers lost on the road to Seattle in a non-conference match up and at home to Stanford 1-0 in their Pac-12 opener.  But there is an indication that things may be different this year.  After jumping out to a 2-0 lead over California last Sunday, Oregon State allowed the Golden Bears to knot the score at 2-2.  Instead of folding, the Beavers then reeled off four consecutive goals in the final twenty-seven minutes of regulation to top California 6-2.  Oregon State head coach Steve Simmons stated, "They got their two, we hunkered down, and shifted the momentum back.  I was very proud of the guys."  Oregon State is now 8-3-0 but things don't get any easier as they now face number one ranked Washington on Sunday, October 12 in what should be an excellent college soccer match.

Keep an eye on the Winthrop Eagles out of the Big South Conference who are off to an 8-2-0 overall record under the direction of head coach Rich Posipanko.  The Eagles have a multi-dimensional attack lead by Magnus Thorsson (5g, 1a), Pol Sole (4g, 3a), Max Hasenstab (4g, 1a), and Jordan Stoddart (4g, 0a).  When they are on their game this is a team that can and will score often.

Creighton is off to an impressive 9-1-1 start which includes a 2-0-0 mark in Big East Conference play.  The Bluejays have now won four straight since they were upset in the friendly confines of Morrison Stadium by Saint Louis 1-0.  Creighton has a signature early season win over Stanford but their schedule to date has not had the degree of difficulty of many other highly ranked teams.  While the Bluejays have performed well, the jury is still out on just how good this team is.  Upcoming Big East matches with the likes of St. John's and Xavier on the road and Georgetown and Marquette at home will answer that question.

Indiana began the year unranked with many thinking that 2014 would be a tough season for the Hoosiers.  There were questions on both sides of the ball entering the 2014 campaign since the Hoosiers lost their top three goal producers from the 2013 season and the fact that a porous IU defense allowed a total of thirty-eight goals in 2013.  The Hoosiers definitely belong in the exceeded expectations column to date with a solid 7-1-3 overall record that includes impressive back-to-back wins over ranked non-conference foes Saint Louis 3-1 at home and Louisville 3-0 on the road.  Tanner Thompson (3g, 2a), Jamie Vollmer (3g, 3a) and Femi Hollinger-Janzen (2g, 2a) have provided offensive productivity while goalkeeper Colin Webb has anchored an IU defense that has recorded five shutouts to date while only allowing a total of seven goals.  Indiana will seek to keep their momentum alive when they travel to face Big Ten foe Ohio State on Sunday.  The Buckeyes struggled early on in the season but have been looking very good of late and a win over IU would be a big plus for them.

Bowling Green gutted out a 1-0 non-conference win on the road in overtime to top Cleveland State University Tuesday night to improve to 9-2-0.  The Falcons under the direction of Eric Nichols have nine wins to date which is the program's highest win total since the 2000 squad was 9-8-1. One reason for the increase in wins is the fact that this team is finding a way to win the close contests that eluded them in the past.  Bowling Green has a huge match coming up this Saturday when they open MAC play at Cochrane Field against an Akron team that has dominated the conference for many years.

Wake Forest followed good back-to-back wins over Akron and Duke, with a 1-0 loss to a solid Hofstra side at home to drop to 6-5-0.  This is a young Deacon team which is contributing to the roller coaster season that they are having.  Wake Forest has a tough on the road match coming up on Friday when they travel to face Syracuse.  Look for the Demon Deacons to pull off an upset or two before the season is over but this team is likely a season away from winning on a consistent basis.

Winning on the road in any conference is tough but perhaps even more so in the Pac-12 where everyone plays everyone home and away and there is no season ending tournament to determine who wins the conference's automatic berth.  California took to the road last week and sustained losses to Washington and Oregon State to drop to 6-3-0 overall and start Pac-12 play with two losses.  This week UCLA will be put to the test when they travel to tangle with California on Friday and Stanford on Sunday.  Washington opened Pac-12 play last weekend with wins at home over California and Stanford but they now have to travel to face a determined Oregon State team on Sunday and a very talented UCLA squad on Thursday, October 16.  To fare well in the Pac-12 it is crucial that you pick up a few wins on the road and hold service when at home.

Maryland is without a doubt among the premier programs in the country but with a 4-5-2 overall record to date and a 1-2-1 mark in Big Ten play they may not make the NCAA Tourney field in 2014.  Look for Sasho Cirovski to get his team back on track but the Terps may have dug themselves into a hole that they can't dig out of.  The bottom line is that the margin for error at Maryland is now pretty slim.  The Terps took a step in the right direction with a 1-0 win Wednesday night over VCU.  A win over Penn State at Ludwig Field on Sunday, October 12, a win at home over non-conference foe Lehigh on Wednesday, October 15, and a win over Indiana in Bloomington on Sunday, October 19 would right the ship.  The Terps then close out regular season play with Santa Clara, Hartwick, and Ohio State in the friendly confines of Ludwig Field.  It is always wise to "Fear the Turtle."

To say that defense has ruled recently at Furman is an understatement.  The Paladins have recorded seven shutouts so far this year in route to a 5-2-3 overall record.  In their past six contests Furman has allowed a total of only two goals but they also have only scored twice.

Many think that Georgetown has more talent from top to bottom than any team in the country.  The Hoyas are off to 6-1-4 overall record with a 1-0-1 mark in Big East play.  Junior forward Brandon Allen, sophomore forward Alex Muyl, sophomore back Joshua Yaro and senior goalkeeper Tomas Gomez are among the best in the county at their positions.

Cal Poly out of the Big West Conference is unbeaten in nine of their last ten contests.  The Mustangs tied UC Irvine and topped CSUN last week to improve to 6-2-3.  They travel to face UC Riverside on Thursday and Cal State Fullerton on Saturday in conference play.

The Patriot League race looks once again to be one that will come down to the final week of play.  Boston University and Lehigh currently sit atop the conference standings with 2-0-0 records while American, Holy Cross, Loyola Maryland, Navy, and Colgate are all 1-1-0.  Army and Bucknell are 0-2-0. The top four teams in regular season play earn the right to participate in the Patriot League Tourney.

A young UC Santa Barbara team has now won four straight since coming out on the short end of a 1-0 contest with UCLA.  A four game road slate that includes Cal State Fullerton and UC Riverside this week and Loyola Marymount and UC Davis the following week will test the mettle of a Gaucho team that has the potential to be very good.  Freshman goalkeeper Brandon Berke has been in goal for UC Santa Barbara the last four contests due to an injury sustained by Josh McNeely.  Defender Drew Murphy, midfielder Ismaila Jome and forward Nick DePuy are among the underclassmen who are impact players.

After beginning the 2014 season with a 2-1 loss to Notre Dame and a 1-0 loss to Indiana, the Marquette Golden Eagles rebounded to win six and tie one to improve to 6-2-1.  Marquette's 0-0 tie with Georgetown on the road last Saturday was their seventh consecutive shutout.  Backs John Pothast, Jack Alberts, Axel Sjoberg, and Adam Hermsen, defensive midfielder Brady Wahl and goalkeeper Charlie Lyon are among the best in the country.

A Look At The Upcoming Contests For The Top 10 Teams In The College Soccer News Men’s National Poll.