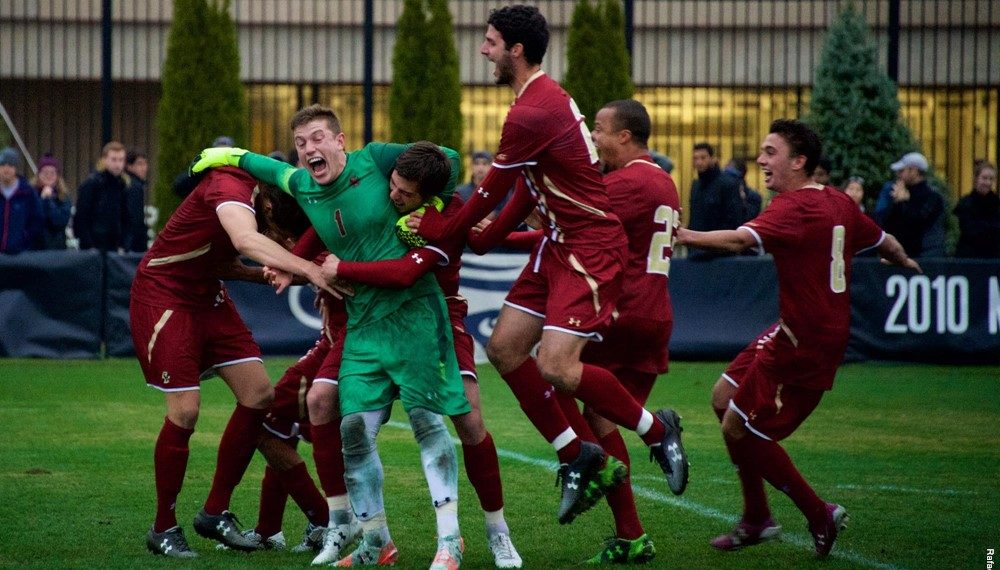 Only eight teams are now left standing on the road to the College Cup.  In five out of the eight contests the top seeded team advanced including three out of the top four seeds.  Only one non-seeded team remains. Four of the teams in the Elite Eight are from the ACC.  As always there were a few surprises.

Wake Forest 1 – Indiana 0 – Creighton 0 – As anticipated a single goal determined the outcome of this contest between two of the premier programs in the country. When it was all said and done, Bobby Muuss' Demon Deacon team came up with the big play they needed to survive and advance in a hard fought 1-0 win over a very good and determined Indiana team.

Redshirt junior midfielder Ricky Greensfelder came off the pine in the eighty-fourth minute of the game to deliver what proved to be the game-winning goal in the eighty-eighth minute of play when he sent a bullet into the back-right corner of the frame from fifteen yards out after being set up by a well played cross from Ian Harkes. The goal was Greensfelder's second of the 2015 campaign and the assist was Harkes's fourth to date this year.

Indiana had seven shots to just five for Wake Forest and a 3 to 1 advantage in corner kicks.  Credit Wake Forest with continuing to find a way to win the close ones. Alex Ferrell had a single save in goal for Wake Forest to record the shutout behind a stout Demon Deacon backline of Kris Reaves, Thomas Haws, Hunter Bandy, and Sam Raben. The shutout was the eleventh of the season for a Wake Forest defense that has allowed a total of only eleven goals to date against a very competitive slate of opponents. Colin Webb had a one save evening for Indiana.

The Demon Deacons improve to 17-2-2 and advance to the Elite Eight for the first time since the 2009 season where they will tangle with Stanford out of the Pac-12 Conference on Saturday. Indiana ends their season with a 13-5-3 overall record.

Stanford 3 – Ohio State 1 – The first half of play was scoreless. However Stanford took control of the contest as the second half progressed.

Stanford forward Jordan Morris, the Pac-12 Player of the Year, scored the first goal of the contest in the fifty-third minute with an assist from midfielder Eric Veso.

Freshman Abdi Mohamed responded for Ohio State when he found the back of the net in the sixty-second minute with an assist from defender Austin Bergstrom.

Number eight seeded Stanford improves to 15-2-2 and advances to the Elite Eight for the first time since 2002 where they will face number one seeded Wake Forest out of the Atlantic Coast Conference. .

Creighton 1 – North Carolina 0 – In the lone Sweet Sixteen contest played on Saturday, the Bluejays and the Tar Heels went toe to toe with each other at Fetzer Field in Chapel Hill before a crowd of 1,432 fans with number twelve seeded Creighton coming out on top upsetting the number five seeded North Carolina Tar Heels on their home turf.  As expected the margin for error in this one was slight with a single goal the difference in the outcome.

Bluejay midfielder Timo Pitter scored the lone goal of the evening in the thirty-eighth minute of play when he controlled a deflected clearing pass at the top of the box and fired a shot that was partially deflected that gave it enough spin to cause it to be redirected into right side of the net past UNC netminder Sam Euler. The goal was Pitter's tenth of the season to date.

Creighton contained the Tar Heel attack for the rest of the evening to secure the victory and advance to the Elite Eight for the fourth time in the past five seasons. North Carolina attacked the entire contest and outshot Creighton 21-9 and had an 11-1 edge in corner kicks but the Bluejays prevailed in the one statistic that counts to earn the right to advance.

Creighton's Connor Sparrow had four saves in goal to record the shutout. Sam Euler had one save in goal for the Tar Heels. The trip to Chapel Hill was a homecoming of sorts for Creighton mentor Elmar Bolowich who was the Tar Heel head coach for twenty-two seasons before accepting the head coaching job at Creighton in 2011.  Creighton improves to 19-3-0 and travels again to face number four seeded Akron in the Elite Eight.

It was a disappointing loss for a very talented North Carolina team that had hopes of making a deeper run in the Tourney but nonetheless it was another very successful season for the Tar Heels who had an impressive  15-2-3 overall record.

Akron 2 – SMU 1 – This one was a little unusual in that both teams netted a goal via an own goal.

The teams went into intermission with Akron on top 2-1.  Neither team scored or allowed an own goal in the second stanza.

Number four seeded Akron improves to 17-3-2 and advances to the Elite Eight where they will host number twelve seeded Creighton on Saturday at 4 p.m. at FirstEnergy Stadium – Cub Cadet Field.

SMU closes out a momentum building 2015 season under the direction of first year head coach Kevin Nelson which will no doubt serve as a building block for the future with a 15-3-4 overall record.

Boston College 1 – Georgetown 1 (ot) – The Eagles continue to soar as Boston College advances 5-4 in penalty kicks. Down goes number three seeded Georgetown in what is the biggest upset so far of the NCAA Tourney.

Boston College got on the board first in the nineteenth minute of the game when freshman midfielder Trevor Davock scored from close range after the play was set up by passes from forward Simon Enstrom and midfielder Isaac Normesinu. The goal was Davock's sixth this year. The Eagles continued to press the attack seeking to extend their lead but neither team was able to find the back of the net and it remained 1-0 at halftime.

The normally very potent Georgetown attack appeared to be slightly off but they appeared to be getting into gear as the second stanza progressed. In the sixtieth minute of play the Hoyas tied it at 1-1 when senior defender Keegan Rosenberry sent a volley into the net out of a corner kick put in play by sophomore midfielder Christopher Lema. The goal was Rosenberry's second of the 2015 season.

Both teams continued to attack and it seemed that Georgetown might break through but both sides continued to play very solid defense and the contest remained 1-1 at the conclusion regulation and overtime.

The Eagles were perfect in their penalty kick attempts with Alex Kapp, Davock, Zeiko Lewis, Raphael Salama and Len Zeugner converting their attempts.

A red hot Boston College team under the direction of Ed Kelly is now 11-7-2.  The Eagles have advanced past Vermont at home and South Florida and Georgetown on the road in the NCAA Tourney to earn the right to travel to face fellow ACC member Syracuse at the Syracuse Soccer Stadium in the Elite Eight on Saturday, December 5 at 2 p.m.

Boston College topped Syracuse 2-1 when the two teams faced each other in Newton, Mass. on October 30 in the final regular contest for both programs.

It was a disappointing end for a very talented Georgetown team that had another banner season that included a 16-2-3 overall record and a perfect 9-0-0 mark in Big East play.

Syracuse 3 – Seattle 1 – The Orange came out firing and jumped to an early lead when freshman defender Miles Robinson decisively drove a header into the back of the net out of a corner kick served in by midfielder Liam Callahan just a little over a minute into the contest. Syracuse upped their lead to 2-0 when forward Noah Rhynhart scored from inside the box with Callahan again contributing the helper.

Seattle sophomore forward David Olsen gave the Redhawks new life when he controlled a loose ball in the box and sent it into the back of the net to close the gap to 2-1 in the sixty-seventh minute of the game.  The goal was Olsen's sixteenth of the season.

Syracuse freshman defender Kamal Miller responded in the 71st minute when he scored out of a free kick put in play by Orange midfielder Julian Buescher to make it 3-1 and conclude the scoring for the evening. The helper was Buescher's eleventh of the 2015 season.

Freshman goalkeeper Hilpert Hendrik had three saves for Syracuse while Shane Haworth had three saves between the pipes for Seattle. Syracuse under the leadership of Ian McIntyre improves to 15-5-3 and advances to the Elite Eight where they will host Boston College.

Seattle under the direction of head coach Pete Fewing closes out an outstanding season with an 18-4-1 overall record that included a 9-1-0 mark in Western Athletic Conference play. The Redhawks' four member graduating class of Michael Roberts, Shane Haworth, Hamza Haddadi and Austin Sweeny leave behind the legacy of being the first team in the Division I history of the program to advance to the Sweet Sixteen.

Ivan Magalhaes got Maryland on the scoreboard when he drove a header into the net from eight yards out coming from a free kick put in play by senior midfielder Mael Corboz.  Freshman forward Eryk Williamson tallied what proved to be the game-winning goal in the thirty-eighth minute when he skillfully flicked a header into the net from ten yards out with Corboz again contributing the assist.  Corboz now has a total of twelve assists this year.

Notre Dame sophomore defender Patrick Berneski closed the gap to 2-1 when he converted a header out of a corner kick put in play by midfielder Evan Panken. The teams went into halftime with the Terps leading 2-1.

Maryland played down a man for the last twelve minutes of the game when Magalhaes received a second yellow card but Maryland was able to keep the Irish off the board to secure the win.

Chris Hubbard had four saves in goal for the Irish. Cody Niedermeier had a single save in goal for Maryland.

Notre Dame concludes the season with a 11-5-6 overall record. Maryland improves to 12-5-5 and advances to the Elite Eight where they will tangle with number two seeded Clemson on Friday, December 4 at 7 p.m. at Historic Riggs Field in what will no doubt be an excellent college soccer match.

Clemson 3- UC Santa Barbara 2 – The Gauchos drew first blood in this one when Seo-In Kim converted a header from five yards out with a double assist from Josue Espana and Cody Gibson.

With less than sixty ticks remaining on the clock in the first half of play, junior defender Aaron Jones made a nice move off the dribble and sent a bullet into the back of the net from twenty-four yards out to ignite the crowd and send the Tigers into intermission with momentum.

Redshirt senior forward Kyle Murphy then came through in the clutch for Clemson when he netted what proved to be the game-winning goal from eight yards out after receiving a cross from midfielder Saul Chinchilla.  Junior forward Thales Moreno started the play when he sent a pass down the right wing to Chinchilla. The goal was Murphy's eighth of the year and his second game-winning tally.

Justin Vom Steeg had four saves in goal for UCSB. Andrew Tarbell had a two save evening between the pipes for Clemson.

Number two seeded Clemson under the direction of Mike Noonan advances to the Elite Eight for the first time since the 2005 season. The Tigers will host number ten seeded Maryland on Friday, December 4 at 7 p.m. at Historic Riggs Field.

A very good UC Santa Barbara team closes out the 2015 season with a 14-7-2 overall record.