September 2, 2016 – Friday Night Lights – What Happened Coast To Coast At A Glance 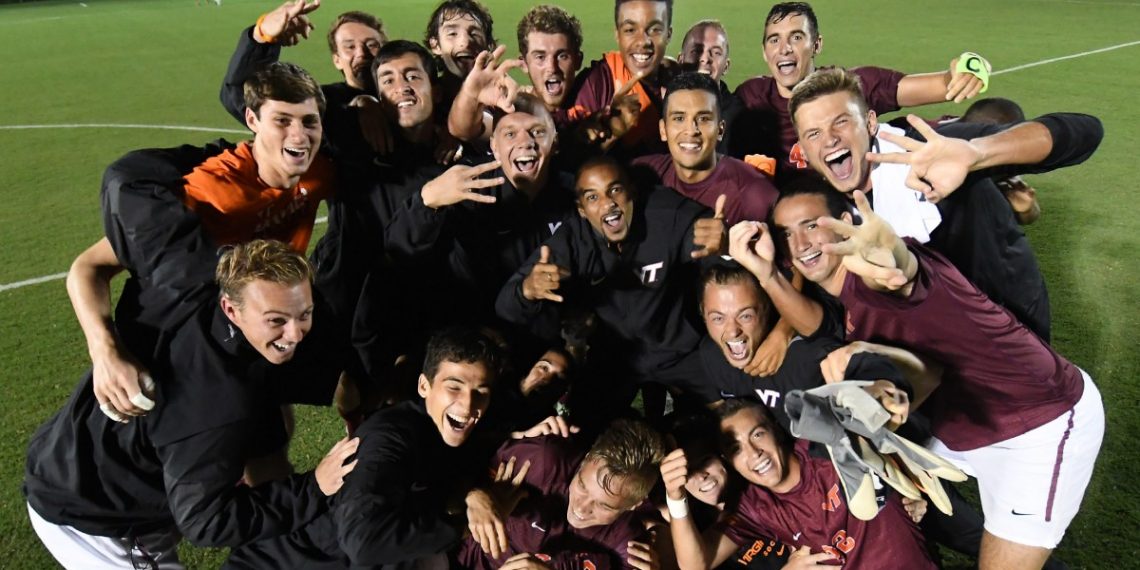 San Diego State 1 – Akron 0 – The number one ranked team in the country goes down. Redshirt senior center back Travis Nicklaw's penalty kick in the 61st minute of the contest gave the Aztecs the edge they needed to upset the Zips at the SDSU Sports Deck.  Goalkeeper Adam Allmaras had two saves in goal to anchor a tenacious San Diego State defensive effort.

Maryland 2 – Georgetown 1 – Sophomore forward Gordon Wild created a "wild" celebration for the Terps when he followed up the rebound of his own missed penalty kick with a mere forty-four ticks remaining in regulation to give Maryland the win.  Sophomore Eryk Williamson netted Maryland's first goal in the fifty-fifth minute of play after receiving a through ball from Amar Sejdic.  Achara scored the lone goal of the evening for the Hoyas in the 84th minute of play with a double assist from teammates Davey Mason and Matt Ledder.

Notre Dame 2 – Stanford 1 (OT) – This one could easily have gone either way but the Irish came up with the big plays needed to prevail. The Cardinal took the early lead when midfielder Drew Skundrich converted a header set up by a cross from Tanner Beason in the 42nd minute of the game. Stanford's Justin Kahl was shown his second yellow card of the evening in the 70th minute and the Cardinal played with ten from that point forward. In the 86th minute Jon Gallagher scored from fourteen yards out after receiving a cross from Jeffrey Farina to knot the score at 1-1 and give the Irish new life. Brandon Aubrey netted the game-winner for Notre Dame out of a free kick from thirty yards out in the 104th minute of play.

Clemson 1 – Creighton 0 – The Tigers pick up a resume building home win over the Bluejays. Junior midfielder Oliver Shannon scored what proved to be the game-winning goal in the second minute of play after receiving a through ball from senior midfielder Inman Mafi. Ximo Miralles had three saves in goal for Clemson.

Boston College 2 – Hofstra 0 – Senior Maximilian Schulze scored in the 90th minute of the match and sophomore Simon Enstrom in the 17th to power the Eagles in this one. Senior midfielder Zeiko Lewis assisted on both goals. Callum Johnson also contributed an assist.

Indiana 2 – California 1 – The Hoosiers came from a goal down to secure the win and improve to 3-0-0 for the first time since the 2012 campaign. Both redshirt sophomore Trevor Swartz and junior Rashad Hyacenth scored in the second stanza for IU. Senior defender Nick Lima drove a blast into the net from thirty yards out in the 44th minute to give California the early lead.

Duke 1 – UCLA 0 – Midfielder Brian White scored the game-winner for the Blue Devils with a shot off the inside of the left post in the 88th minute of the play to give Duke a big 1-0 win on the road. Midfielder Sunlel Veerakone contributed the helper. Robert Moewes had a huge eight save evening in goal to play a key role in the Blue Devil win.

Denver 2 – Northwestern 1 – All the scoring in this one took place in the second half. Andrew Shinyashiki scored in the 67th minute and Alex Underwood in the 73rd minute with an assist from Sam Hamilton to give the Pioneers the edge they needed to secure a nice win. Jeffrey Hopson converted a penalty kick for Northwestern in the 71st minute.

Virginia 1 – Xavier 1 (OT) – Matt Vasquenza scored from twelve yards out in the 58th minute for Xavier. Leon Marc tied it up in the 62nd minute when he sent a rebound into the back of the frame for the Cavaliers.  Junior Jeff Caldwell had six saves between the pipes for Virginia. Jake Ciricillo had five saves in goal for the visiting Musketeers out of the Big East Conference.

SMU 2 – Western Illinois 1 – This one was much closer than some thought it would be. Freshman Garrett McLaughlin drove a header into the back of the net out of a corner kick served in by Bryce Clark in the third minute of the contest to give SMU an early 1-0 advantage. Daniel Collins responded in the 37th minute with a goal for the visiting Leathernecks to knot the score at 1-1. Mauro Cichero netted the game-winner for SMU in the 43rd minute of the match.

Louisville 2 – Connecticut 0 – Connecticut's home winning streak was halted by Louisville at seven. Mohamed Thiaw scored just forty-four seconds into the contest and Tate Schmitt sent a rebound back into the net in the 29th minute to give Louisville a nice on the road victory over the Huskies. Stefan Cleveland had a single save in goal to record the shutout for the Cardinals.

Virginia Tech 4 – South Florida 1 – Luiz Garza scored for South Florida in the third minute of the match to send a scare into the home crowd but it was all Virginia Tech from their forward with sophomore Acuna Marcelo scoring twice in the first half of play for the Hokies and Will Mejia and Burke Bender contributing single goals in the second stanza. Virginia Tech is off to a 3-0-0 start but they have a tough one coming up when they travel to face a Georgetown side that is much better than their 0-0-3 record to date indicates.

Kentucky 1 – Dartmouth 1 (OT) – Defender Wyatt Omsberg converted a penalty kick in the 45th minute of play to give Dartmouth a 1-0 lead. Freshman midfielder Connor Probert responded with a goal to the near post for Kentucky off an assist from senior midfielder Napo Matsoso to knot the score at 1-1 in the 61st minute of the play to conclude the scoring for the evening. The contest was the season opener for Dartmouth out of the Ancient Eight Conference. James Hickok had six saves in goal for Kentucky. Stuart Ford had a two save evening between the pipes for the Big Green.

Utah Valley 4 – Evansville 2 – Skyler Milne and Paul Hoffmeister each netted two goals to lead Utah Valley to the victory. Ian McGrath had both goals in a losing cause for Evansville.

Washington 2 – St. Mary's (Ca) 1 – Freshman forward Jake Rudel scored in the first minute to give the Gaels a 1-0 lead. Forward Mason Robertson responded in the tenth minute for Washington when he drove a header into the back of the net with an assist from Justin Fiddes to tie it at 1-1. Freshman midfielder Handwalla Bwana netted what proved to be the game winning goal for Washington in the 86th minute with an assist from forward Scott Menzies.

Portland 2 – Ohio State 0 – A crowd of 2,082 was on hand at Merlo Field in Portland to witness this one. Midfielder Gio Magana-Rivera scored in the 67th minute and Erik Edwardson sent a rebound into the back of the net in the 77th minute of play to give Portland a very good win over visiting Ohio State. Jack Jellah had both assists to continue to play a key role in the Pilot attack.

Cal State Fullerton 3 – UNLV 1 – Alex Heilmann put on an offensive show for the Titans netting a hat trick that included two goals in the last sixteen minute of the game to lead Cal State Fullerton to the win. Wayde Scibilia netted the lone goal for UNLV. The Titans had a 23 to 3 advantage in shots for the contest.

Oregon State 3 – San Jose State 0 – Junior forward Timmy Mueller powered the Beaver attack in this one contributing a hat trick. Nolan Wirth had one save in goal to record the shutout for Oregon State.

New Mexico 2 – CSUN 0 – Niko Hasen drew first blood for New Mexico when he found the back of the net in the 23rd minute of the match. Devin Boyce pretty much put it on ice for the Lobos when he scored in the 70th minute to make it 2-0. Jason Beaulieu had two saves between the pipes to anchor a solid defensive effort by the Lobos.

Marquette 4 – UIC 1 – Marquette took to the road and found their attack with a four goal evening.  Jose Fuentes found the back of the net for UIC just 31 seconds into the contest and it looked like this might be a good evening for the Flames. But Marquette came roaring back with goals from Luka Prpa and Jan Maertins in the first half and by Toby Howell and Prpa again in the second stanza to secure a convincing win.

Bradley 1 – Fairleigh Dickinson 0 – This one looked like it might be scoreless until Richard Olson decided otherwise when he slotted a shot into the left side of the goal after receiving a pass from Jason Lesch in the closing minutes of regulation. Bradley improves to 1-1-1 while FDU drops to 1-2-0.