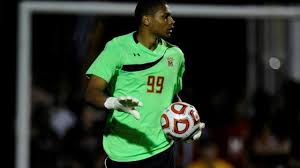 Looking at the Maryland Terrapins first five games of the year, you wouldn’t expect them to be battling for a national championship on Sunday.  The team in that span gave up twelve goals and only came out with one win.  Although, much of this early season failure was due to the lack of experience in the lineup.  Terrapin coach Sasho Cirovski trotted out a backline and goalkeeper combination of five guys, four whom were freshmen.   This inexperience led to tactical breakdowns and avoidable mistakes which come with playing time together.

Fast forward three months and this defensive line is a cohesive unit.  Maryland has won their last 11 games in a row and have only given up five goals during their streak, without giving up more than one in any game.  Maybe the biggest part of this midseason turnaround is freshman goalkeeper Zack Steffen.

Steffen, the starter for all Maryland’s games this year has been on fire recently, playing a key part in the team’s success.  Down the stretch, the ACC all freshman team net-minder has made some unbelievable saves.  Coach Cirovski was very complimentary of his keeper, “I’ve seen saves through Zack against UC Irvine, Notre Dame, and Boston College that are top ten saves of the year.”

Steffen took on a tough role this year, stepping into a legendary program like Maryland’s and being expected to perform.  He came in, earned his spot and won the respect of his teammates.  There’s clearly going to be a learning curve, but the Philadelphia Union academy product has done well to make that transition as quick as possible.  “He gotten better in every aspect” Coach Cirovski stated “but he still has a long way to go.”

The recent found success is nothing new to Steffen, who has seen consistent call ups for both the U18 US youth national team and the U20 squad.  The sensational freshman hasn’t let these accomplishments get to his head.  “He’s really grounded, humble, and works hard.” Coach Cirovski adamantly made known.

Cirovski will hope a common trend with stay true for Sunday’s final.  Maryland’s last two national championships in 2005 and 2008 both had a Terps freshman between the pipes in two future professionals, Chris Seitz and Zac MacMath respectively.  Both these keepers have gone on to have commendable professional careers and Steffen wishes to do the same.

The Downingtown, Pennsylvania native looks poised for a future homegrown contract with the local MLS side, Philadelphia Union. Whether it’s this year or down the road, Steffen is a once in a generation American goalkeeping prospect regardless, and his time will come in the professional ranks.  Steffen has gotten a possible sneak peak of his future stadium this weekend playing on the Union’s home field, PPL Park for the College Cup.  “It’s special to play in front of family and friends, having them here cheering”

Steffen will look to continue his impressive run of form Sunday in front of the “home” crowd and help the Terps win their first National Championship since 2008.

Ben Roth is a contributing writer for College Soccer News.  He is reporting this week from the College Cup at PPL Park in Chester, Pa.  He can be reached at Ben.rothpda16@gmail.com