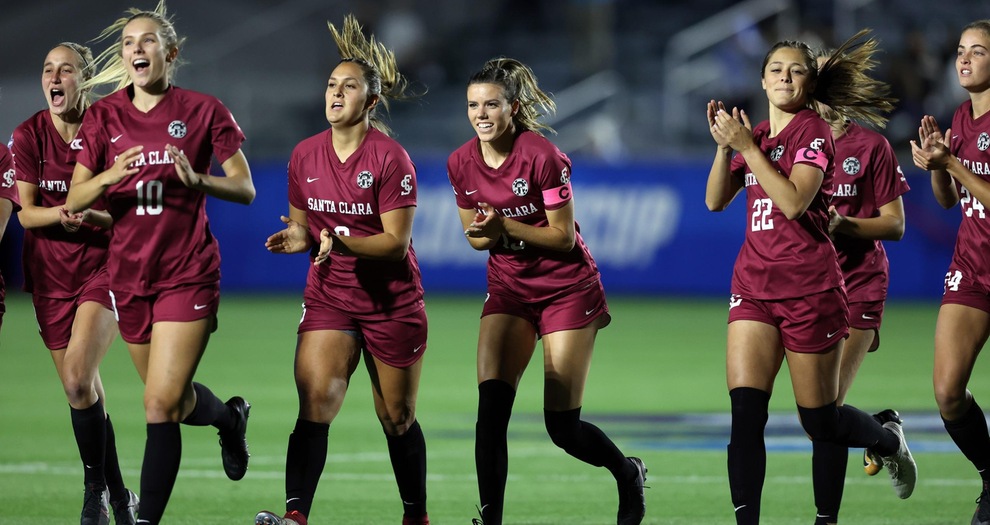 This contest was played at a much different tempo than the first semifinal of the day between FSU and Virginia which was decided by penalty kicks after it was scoreless at the end of regulation and overtime.

It may have seemed to North Carolina like they were returning to the scene of the crime when they took to the pitch at WakeMed Soccer Park in Cary, North Carolina where they previously suffered their only loss of the season on November 15, 2020 when defeated by FSU 3-2 in the ACC Tournament Championship game.

Soccer is a game opportunity and momentum particularly during the one loss and your season is over environment of the NCAA Tourney.

North Carolina came out on the front foot and did a good job of putting Santa Clara under pressure in the early going. It likely seemed to many of those on hand at WakeMed Soccer Park and those watching the game live on ESPN2 that it was just a matter of time before junior midfielder Brianna Pinto or one of her Tar Heel teammates found a narrow seam in the attacking third that they could exploit.

Instead, the Broncos played through the early pressure and the momentum shifted their way when sophomore forward Izzy D’Aquila made the run that she needed to make to be in the right place at the right time to control a deflection and decisively slot it into the back of the frame from inside the box in the 20th minute of the match to give the Santa Clara an early 1-0. Aquilla’s goal was the first that the Tar Heels had allowed since their loss to FSU in the ACC Tournament Championship contest in November. Like many goals it resulted from a combination of errors that included an errant pass in the midfield and a miscue in the back.

There were ebbs and flows during the remainder of the first half but neither team was able to breakthrough and the teams headed into intermission with the the Broncos up 1-0 and the outcome still very much in doubt.

North Carolina again came out on the front foot in the second half and it looked like the momentum had shifted back their way when Pinto produced the equalizer for the Tar Heels in the 51st minute after receiving a through ball that she placed in the right side of the goal from inside the box. Pinto’s goal was set up by passes from Sam Meza and Rachel Jones.

In soccer, goals often come in quick succession. The contest remained tied for a mere 30 seconds before Kelsey Turnbow alertly sent the rebound of teammate D’Aquila’s shot back into the net to put Santa Clara back on top 2-1.

Junior midfielder Skylar Smith then added the insurance goal and the icing on the cake for the Broncos when she did what all of the best finishers do by following up the rebound of her own missed shot and depositing it back into the net in the 60th minute of the match.

The effort was there throughout the contest for a young Tar Heel team but they were simply unable to contain a potent and highly motivated Santa Clara offense or to breakthrough a bend but don’t break Bronco defense anchored by All-American Alex Loera, the WCC Defensive Player of the Year, and redshirt freshman goalkeeper Marlee Nicolos.

It was an impressive evening for a Santa Clara team under head coach Jerry Smith that improves to 10-1-0 and advances to the national championship match where they will face number one seed Florida State. The Seminoles will be Santa Clara’s third straight opponent from the Atlantic Coast Conference.

North Carolina concludes another banner although unconventional 2020 season with an 18-2-0 record during which several players who didn’t see a lot of playing time during the fall stepped up during the spring season to help fill the gaps that existed due to the departure at the conclusion of the fall 2020 season of defenders Emily Fox and Julia Dorsey and midfielder Taylor Otto.