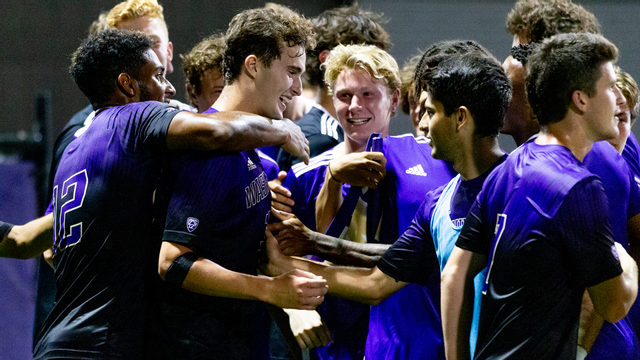 After About Two Months Of Play, The National Contenders Are Emerging. There ARe Plenty Of Plenty Of Important Matchups This Weekend, With Each Of The Top Ten Teams In Action. Let’s Take A Look At These Matchups And What Is At State. By Brian Ludden

#1 Washington – Washington heads into the weekend with an unbeaten record, with their only hiccup being a 1-1 draw vs. Air Force.  Washington will face potentially the biggest test of their season on Thursday, when they host #6 Stanford.  There are still plenty of conference matches left for Washington and Stanford, but this game could give the winner a slight advantage in the battle for regular season champions.  Washington has another conference match on Sunday, where they host Pac-12 bottom-feeders California.  Washington will be expected to win this game, but cannot afford to be complacent and lose focus.

#2 Duke – Duke jumped up from fourth to second in the College Soccer News poll following their entertaining 3-2 win over then-#1 Wake Forest last weekend.  As the only remaining unbeaten team in ACC play, Duke holds a one-point lead over Virginia in the ACC Coastal standings, but the Blue Devils will head to Charlottesville to take on #14 Virginia on Friday night.  Duke has allowed only five goals all season, with Eliot Hamill keeping six clean sheets in ten games so far. Virginia will definitely look to test Hamill in this one, and the Cavaliers usually have no problem generating chances, as they are sixth in the nation with 180 shots this season.  On the offensive side, Shakur ​​Mohammed leads Duke in goals with 5, while Axel Gudbjornsson and Jai Bean sit behind him with three goals each.

#3 – Wake Forest – The Demon Deacons lost their first game of the season last weekend in the aforementioned 3-2 loss to previously 4th ranked Duke.  Wake Forest still sits atop the ACC Atlantic standings after 4 matches, level on points with #4 Syracuse.  We get another divisional top-of-the-table clash on Friday night in ACC action, as Wake Forest will make the trip to upstate New York to face Syracuse.  The winner will move into sole possession of first place with three conference games remaining after Friday’s matchup.

#4 – Syracuse – After a disappointing 2-1 loss vs. Cornell on Tuesday, Syracuse will have to turn things around this weekend, as they face Wake Forest in that important ACC Atlantic clash on Friday night.  It took Syracuse more than 89 minutes to score against Cornell, with their only goal coming from a late penalty kick.  They’ll have to do better on Friday, as they face a Wake Forest team that leads the ACC in goals.  Syracuse, however, is tied for the least goals allowed, only allowing 5 goals in 11 matches.  Friday’s night matchup guarantees to be a good one, as the conference’s top statistical offense takes on one of the conference’s best defenses.

#5 – Kentucky – After a 3-1 win last Saturday against James Madison, Kentucky remained undefeated on the season, with 7 wins and 2 draws.  They should easily remain undefeated after this weekend as well, as they face a 1-9 Georgia Southern team that is 194th (out of 203 teams) in terms of goals against average, conceding 2.6 goals per game.  Kentucky sits atop the Sun Belt with 7 points from 3 conference games, and should be able to pick up three more points on Sunday night.

#6 Stanford – Stanford is one of the remaining unbeaten teams this season, as they boast a record of 6 wins, 3 draws, and no losses.  However, they’ll face their biggest test of the season on Thursday night as they face top-ranked Washington.  Stanford is second in the nation when it comes to goals against average, only conceding .444 goals per game.  Washington, however, is one of the best offensive teams in the nation, ranking in the top ten in terms of total goals.  Following Thursday’s top-ten matchup, Stanford will head to Corvallis to take on Oregon State.  Stanford hasn’t won in Corvallis since 2017, and will hope to change that on Sunday.

#7 Maryland – Maryland enters the weekend coming off of a thrilling 3-2 comeback win against Rutgers, a game in which the Terrapins trailed 2-0 inside 22 minutes before scoring three unanswered goals and taking all three points.  Up next for Maryland is a Sunday afternoon Big Ten matchup against one win Northwestern.  Northwestern is currently last in the conference with 25 goals allowed this season, while Maryland is second in the conference in terms of goals scored.  On paper, it should be a comfortable win for #7 Maryland, but a loss could set them back in the race for the regular season title.

#8 Marshall – After three Sun Belt Conference matches, the Thundering Herd sit two points back of leader Kentucky.  Marshall heads to Columbia, South Carolina, where they will take on the South Carolina Gamecocks.  South Carolina is just a point behind Marshall after the first few conference games, and is going into Saturday’s match on a 4-game unbeaten run.  Marshall enters the match with just one loss on the season, a 1-0 loss at Butler back in August.  Thundering Herd freshman Matthew Bell ranks sixth in the nation in goals scored, with 8 goals in 9 matches.  As one of the main threats in this Marshall team, South Carolina will have to shut down Bell if they want to pull off the upset.

#9 Portland – Portland heads into the weekend with an unbeaten 7-0-3 record that includes wins against West Virginia and UCLA, as well as road draws against then-#14 Indiana and #11 Denver.  With 27 goals on the season, Portland leads the WCC conference in goals by a healthy margin, and is ninth in the nation in that category.   Portland will head south to take on San Francisco on Saturday night.  San Francisco lost their opening conference match against Loyola Marymount, but are second in the conference in goals scored.  Portland should be able to take care of business in what could end up being a 4 or 5 goal game between the conference’s top offenses.

#10 – Tulsa – Tulsa remained at #10 this week after a scoreless draw at UAB.  Tulsa sits at 2-1-1 in American Athletic Conference play, coming off a big 3-0 win at home over conference opponent Florida Atlantic. Tulsa’s top offensive threats, Alex Meinhard and Malik Henry-Scott, lead the team with 5 goals each.  Next up for the Goldne Hurricane is a Sunday night trip to Tampa, where they face USF. Tulsa will hope to continue their 4-game shutout streak on Sunday evening, while South Florida will look to continue a 4-game unbeaten streak of their own after a 2-2 draw on Wednesday night vs. UAB.