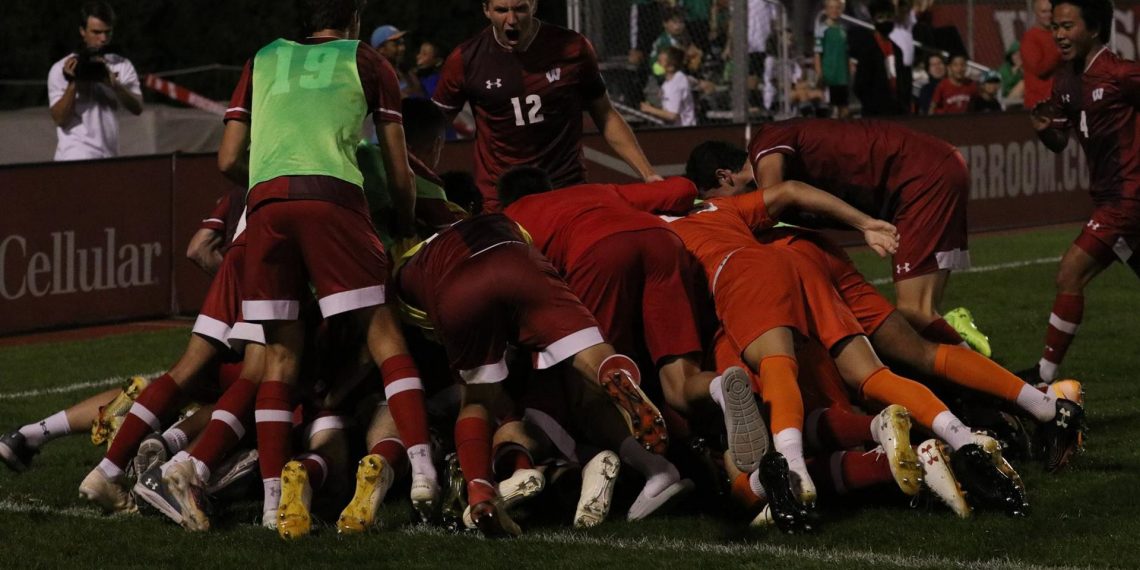 Many Contests went As Expected But There Were A Few Exceptions.

#3 Washington 2 – Portland – 0 – The Huskies secure a solid 2-0 on the road win over the Pilots to improve to 7-0-0. Neither team was able to settle into a rhythm in the first half of play and the contest remained scoreless at halftime. Washington broke the ice in the 61st minute of play when defender Kendall Burks lofted a header into the back of the frame out of a free kick served in by junior defender Charlie Ostrem. Portland applied pressure in an attempt to find the equalizing goal but the Pilots were unable to break through a solid Washington defense that was anchored by backs Ryan Sailor, Achille Robin, Ostrem and Burks along with goalkeeper Sam Fowler who had five stops in goal to secure the shutout for the Huskies. Freshman midfielder Kalani Kossa-Rienzi added the second goal for Washington in the 76th minute utilizing his left foot to cleanly place a shot into the left side of the net from just inside the box after receiving a well-played through ball from sophomore midfielder Christian Soto. The Huskies will open Pac-12 play when they host a San Diego State team on Thursday that is off to a very good start.

#6 Maryland 2 – Ohio State 1 – The Terps displayed a nice balance between offensive pressure and defensive stability to top the Buckeyes in this Big 10 matchup. Junior forward Hunter George scored the lone goal of the first half for Maryland in the 24th minute of play when he sent a left footed shot into the back of the frame that was set up by a nice move off the dribble and cross from teammate Joshua Bolma. The contest remained 1-0 at intermission. Maryland added what proved to be the game-winning goal in the 58th minute after Nick Richardson intercepted a pass and sent it to Ben Bender near the top of the box who passed to Bolma who place it into the far post at close range. Ohio State closed the gap to 2-1 when Laurence Wootton converted a penalty kick in the 67th minute but that concluded the scoring for the evening. The Terps are off and running with a 7-1-0 record and 2-0-0 mark in Big 10 play.

#8 Tulsa 1 – Memphis 0 – The Golden Hurricane continue to find a way to expand their win total with a win on the road over the Tigers. The lone score of the evening was a penalty kick from senior defender Henry Sach in the 22nd minute of the match. The pk resulted when freshman forward Takayoski Wyatt was fouled in the box. Tulsa had a 15 to 7 advantage in shots. Alex Lopez had one save in goal for the Golden Hurricane and Colin Welsh had a five save evening for Memphis. Tulsa has a big AAC game coming up on Friday when they host a ranked SMU team that is 5-0-2 on Wednesday at 7 p.m.

#11 Virginia Tech 2 – Notre Dame 1 – The Hokies continue to flirt with defeat but continue to come up with the big play needed to prevail. This one was scoreless at the end of 45 minutes of play. Virginia Tech got on the board first when playmaker senior forward Jacob Labovitz received a pass from Landon Ameres and made a nice spin move from inside the box to create the seam he needed to send a left-footer into the back of the frame in the 53rd minute of play. It seemed for a few seconds – but only a few – that Virginia Tech might pull away from the Irish but that was not the case when less than a minute later Notre Dame got the equalizer when a foul in the box resulted in a penalty kick which Philip Quinton converted to knot the score at 1-1. Neither team was able to break through during the remainder of regulation and the Hokies found themselves in overtime for the fourth time this season. With a minute remaining in the first overtime period, Danny Flores utilized his touch on the ball to juke past a ton of Notre Dame players to net a highlight reel goal that gave Virginia Tech a 2-1 win and brought the Hokie faithful on hand to their feet. An exciting Virginia Tech team improves to 5-1-2 overall with a 2-1-0 mark in ACC play. The Hokies will host ETSU on Tuesday, September 8 at 7 pm.

#13 Loyola Marymount 1 – California 0 – Loyola Marymount continues do a good job of finding a way to prevail in close contests securing their third 1-0 win in a row and their fourth of the season. Senior midfielder Narciso Cervantes gave the Lions the edge they needed to claim a nice win on the road when he placed a shot into the net that was made possible by a pass from Leo Zulli and a cross from Steven Anderson.  The goal was Cervantes’ fourth of the year. Jacob Jackson again took care of business in goal for Loyola Marymount with a two save evening. Defenders Dylan Shockey, Christian Wood, Nick Douchot and Corbin Mercado joined Jackson to anchor a solid Lion defense that has only allowed a total of only five goals while posting an 8-0-1 overall record. Despite the success that Loyola Marymount has had to so far they remain a team with a small margin for error. The Lions will begin WCC play on Saturday, October 2 when they travel to Stockton to tangle with Pacific.

#15 SMU 2 – UCF 0 – All the scoring in this one took place in the early stages of the first and second stanzas. The Mustangs continue what has been a very promising season to date with an AAC win in Dallas over South Florida. Lane Warrington scored out of a corner kick with a double assist from Thomas Haney and Knut Ahlander in just the fourth minute of the match and the Mustangs never relinquished the lead. Forward Jose Ortiz added SMU’s second goal a little over a minute into the second half with a helper from midfielder Skage Simonsen. A very balanced SMU attack has netted a total of seventeen goals while a stout defense anchored by sophomore netminder Cole Johnson has held opponents to only 5 goals. SMU is 5-0-2 with a 2-0-0 mark in conference play. The Mustangs have a showdown contest coming up next Wednesday when they take a road trip to face a Tulsa team that is 6-0-0.

Marquette 3 -#17 Seton Hall 1 – Down go the Pirates. A porous Seton Hall defense allowed Marquette to put three in the back of the net and this time Seton Hall was unable to prevail by outscoring their opponent. A Marquette team which began the season with three wins but then folded like a cheap suit when they lost four in a row during which they were unable to score a single goal came alive against the Pirates. Midfielder Edrey Caceres scored in the 12th minute and forward Lukas Sunesson in the 34th for Marquette. The Golden Eagles went into halftime up 2-0 but with the outcome still in doubt. Caceres put the icing on the cake when he scored in the 70th minute to give Marquette a 3-0 advantage. Ian Albuquerque scored for Seton Hall in the last minute of the match to close the gap to 3-1 but at that point the outcome of the game had already been decided. Marquette improves to 4-4-0 and secures a good on the road win in Big East play that they hope will jump start the program. Seton Hall losses two in a row to drop to 4-2-2. The Pirates will see to regroup and get back on track when they travel to the Bronx on Tuesday to face Fordham in a non-conference encounter.

Wisconsin 2 – #19 Rutgers 0 – The clock struck midnight for a Rutgers team that sustained their first loss of the season when they were topped 2-0 at home by Wisconsin in a Big Ten matchup. The Scarlet Knights had a 13 to 9 advantage in shots and the majority of possession but Wisconsin prevailed in the only statistic that really matters with Zach Klancnik converting a header in the 42nd minute out of a free kick put in play by teammate Aron Eli Saevarrson and senior midfielder Henri Tophoven intercepting an errant pass and sending a long left footed shot into the back of the frame from just over midfield in the 58th minute to give the Badgers a nice on the road win. A steadily improving Wisconsin team is now 4-2-3 while Rutgers drops to 7-1-1. Things don’t get any easier for Rutgers with a game in College Park coming up against Maryland on Tuesday. Wisconsin improves to 4-2-3 and will take on Maryland in Madison on noon on Sunday, October 3.

#24 Bowling Green 2 – Canisius 1 – The Falcons win their fourth consecutive contest to improve to 7-1-1 with a win in Buffalo over Canisius. Sophomore defender Joey Akpunonu sent a twisting ball into the left side of the frame out of a corner kick put in play by midfielder Alberto Anaya in the 7th minute of the game to give Bowling Green a 1-0 lead. Midfielder Kyle Cusimano scored for Bowling Green in the 28th minute with a double assist from midfielder Zach Buescher and Anaya to give the Falcons a 2-0 advantage which they took into intermission. Midfielder Noah Hodson pulled one back for Canisius when he scored in the 59th minute of the game. Canisius had a 16 to 10 advantage in shots while Bowling Green had a 6 to 4 advantage in shots of goal. A Bowling Green defense anchored in goal by Logan Kowalczyk has only allowed a total of three goals to date while a multi-dimensional Falcon attack has produced a total of 17 goals. Bowling Green has a tough contest coming up on Wednesday in Columbus against Ohio State out of the Big Ten. The Falcons will be in trouble if they are unable to put in two solid halves of play in that one.

#25 Wake Forest 1 – NC State 1 – This ACC battle took place in Raleigh. All the scoring took place within the span of one minute with NC State drawing first blood in the 71st minute when midfielder Alex Hernandez sent a half-volley into the back of the frame out of a corner kick with forward Kuda Muskwe contributing the assist. Wake Forest midfielder Chase Oliver responded 39 ticks off the clock later with teammates defender Jahlane Forbes and midfielder Omar Hernandez providing the helpers. This one was all defense in the first half with neither team managing to muster a shot on goal. NC State had a 15 to 11 advantage in shots but both teams had only three shots on goal for the evening in a match in which neither team was able to put together the combinations they needed to prevail.  Wake Forest will host Liberty on Tuesday and ACC foe Clemson on Friday in what shapes up to be a crucial contest for both teams. NC State will travel to Famville, Virginia to face Longwood on Tuesday and get back into ACC play on Sunday when they travel to Chapel Hill to tangle with the North Carolina Tar Heels. 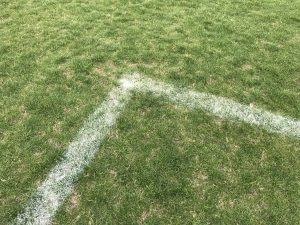