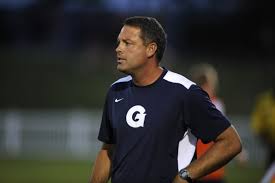 The Georgetown Hoyas may have been ranked second in the College Soccer News preseason poll and third in the National Soccer Coaches Association of America (NSCAA) preseason poll, but after another disappointing loss they know they must improve and do so urgently.

The Hoyas suffered their second defeat in two preseason games on Sunday, August 25 as they went down 3-1 to the Syracuse Orange in front of a crowd of 571 at Shaw Field in Georgetown.

Junior Nick Perea was the difference for the Orange in the first half as he scored twice in the opening 10 minutes thanks to a penalty and a header at the near post from a corner. Perea was then on hand in the 57th minute, turning provider as midfielder Stefanos Stamoulacatos slotted a through ball home to give the visitors a 3-0 lead.

Georgetown had plenty of possession in the second half and created a number of chances, but could only produce one goal in the 83rd minute thanks to Steve Neumann’s coolly-taken penalty kick.

For Georgetown Head Coach Brian Wiese, it was a disappointing result given that the start of the new NCAA season is so close, with the Hoyas facing a tough road trip against California on August 30 and Stanford on September 1 to open regular season play.

“I think you have to give a lot of credit to Syracuse, they came out and won the game in the first 10 minutes,” Wiese said after the game. “They played it like it was an NCAA Tournament game and our guys played it like it was a preseason scrimmage. The last preseason game, you want it to look a little bit more like a regular game but you’ve still got guys you’re trying to see and do some things and trying to get some fitness in for some guys.”

Despite conceding three goals, Georgetown created plenty of chances in the form of 14 shots. However, Wiese felt that there was plenty of room for improvement for his side, especially when it comes to the attacking half of the field.

“I would argue that we didn’t create anywhere near as many chances as we’d have liked to,” Wiese said. “While we created some, we needed to get a bit more aggressive in terms of how we’re going to goal and attacking defences. While we created plenty of chances, we needed to be even better to generate a little bit more.”

The home side gave plenty of playing time to their freshman recruits in this game, with Alex Muyl impressing in attack and Joshua Yaro looking solid in the center of the defence. And Wiese believes that despite the loss of several senior players from last year, his roster is deep enough that come the regular season the Hoyas will have plenty of options.

“We have real depth this year, one of the hard things for me is picking the team because there’s some different components,” Wiese added. “We had a lot of young guys who got on and we have some young guys who didn’t get on today who have been good in training too, so it’s exciting. The future is very exciting for those guys. They’re just scratching the surface right now, but we’re very excited about what they can be.”

Alongside Georgetown’s new recruits, sophomore Brandon Allen logged an hour of playing time and worked hard for little reward up front alongside senior Steve Neumann. Having come back from being with the United States U-20s for the U-20 World Cup, Allen is still searching for his best form but was happy with what he was able to achieve for his college team.

Georgetown now has until Friday August 30 to work in training ahead of their first game of the new season. However, Wiese and his players know there will be many tough tests ahead if the Hoyas are to repeat their appearance in the 2012 College Cup final this year.

Chris Teale is a contributing writer for College Soccer News. You can reach him at chris.teale55@gmail.com or follow him on Twitter @chris_teale.