Friday Night Lights – What Transpired At A Glance Coast To Coast – September 16, 2016 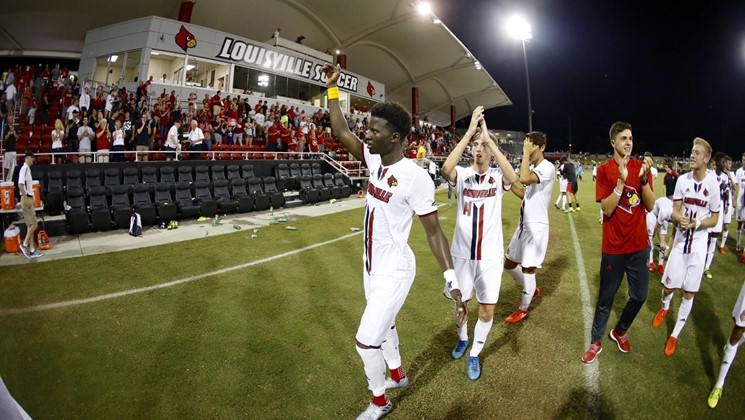 North Carolina 1 – Pitt 0 – Redshirt senior back Walker Hume netted the lone goal of the evening out of a free kick from thirty yards out with a double assist from midfielder Cam Lindley and forward Tucker Hume.  The Tar Heels rebound from a 1-0 loss to ETSU on Tuesday night to improve to 5-1-0 to date.  Redshirt sophomore James Pyle recorded the shutout in goal for UNC.

Louisville 1 – Notre Dame 0 – The Irish sustain their first loss of the season with junior forward Mohamed Thiaw scoring what proved to be the difference maker for Louisville in the twenty-fifth minute of the match from forty yards out after receiving a pass from junior back Joey Kunkel in this crucial Atlantic Coast Conference contest.  Credit Louisville and goalkeeper Stefan Cleveland who had a three save evening with a great job of containing the Irish attack.  Notre Dame drops to 6-1-0 while Louisville picks up a big win to improve to 5-1-1.

Syracuse 2 – Boston College 0 – This one was scoreless at intermission but Syracuse took control in the second half with a goal in the fiftieth minute of the contest from Jonathan Hagman with a helper from Johannes Pieles to go up 1-0 followed by a Kenny Lassiter goal in the 74th minute that was set up by a cross  from senior forward Chris Nanco.  The Orange defense anchored by senior back Louis Cross and sophomores Kamal Miller and Miles Robinson and netminder  Hendrik Hilpert did a good job of containing a potentially very potent Boston College offense.  Syracuse improves to 7-0-0 while Boston College drops to 4-2-1 overall.

Wake Forest 2 – Duke 0 – The Demon Deacons took charge early on with freshman forward Ema Twumasi slotting a shot into the lower right corner of the goal from inside the box in the nineteenth minute of play and junior midfielder  Jon Bakero placing a shot into the right side of the frame from twenty yards out in the twenty-fifth minute of the match.  Wake Forest was again solid on the defensive side of the ball with a defense anchored by junior center back Kevin Politz and goalkeeper Alec Ferrell who recorded the shutout with a four save evening. Wake Forest ups their record to 5-1-1 while Duke drops to 2-2-1.

Akron 2 – Tulsa 1 – The Zips improve to 5-2-0 with a solid win on the road over an always competitive Tulsa team.  The victory was Akron head coach Jared Embick's 100th career coaching win.  The contest was scoreless at halftime.  Defender Shane Wiedt scored out of a free kick from fifteen yards out in the sixty-fifth minute to give Akron a 1-0 lead.  Tulsa tied it at 1-1 when midfielder Ray Saari converted a penalty kick in the eighty-fifth minute of the contest. Redshirt sophomore Ezana Kahsay netted the game-winning goal for Akron in the eighty-eighth minute after receiving a cross from Brad Ruhaak.  Tulsa now stands at 2-2-2 overall.  Akron travels to face SMU in Dallas on Monday.

Virginia Tech 3 – N.C. State 0 – Forwards  Marcelo Acuna and Som Essome score in the eleventh and fifteenth minutes and forward Ryan Marcano added the third marker in the sixty-eighth minute to propel  Virginia Tech to a win in this ACC matchup.  The Hokies improve to 6-1-0. The Wolfpack drop to 1-5-0 year to date.  Virginia Tech head coach Mike Brizendine stated, "I think we took opportunities when we saw them and scored three great goals."

Washington 3 – Davidson 2 (OT) – This back and forth affair was closer than expected.  Senior forward Maxi Pragnell gave Davidson an early 1-0 lead.  Midfielder Handwalla Bwana scored in the tenth minute for Washington to tie it at 1-1. A gutsy Davidson side responded with a goal from senior midfielder Christian Fechter in the twelfth minute to take a 2-1 advantage. Kyle Coffee scored for the Huskies to tie it up at 2-2 in the seventy-third minute.  David Coly netted the game-winner for Washington in the second overtime period to conclude the scoring at 3-2.  Bwana had a one goal and two assist evening for Washington. The Huskies improve to 4-2-0 while Davidson drops to 1-4-0.  Andrew Kenneson had seven saves in goal for Davidson.

California 2 – Omaha 0 – Junior midfielder Aravind Sivakumar netted what proved to be the game-winning goal for the Golden Bears in the sixty-first minute of play with a double assist from Paul Salcedo and Jose Carerra-Garcia.  Christian Thierjung added an insurance goal when he calmly converted a penalty kick in the eighty-third minute of the match.  California improves to 2-2-1 while Omaha drops to 2-2-3. Jonathan Klinsmann secured the shutout in goal with a two save evening.  Joseph Gitis had six saves between the pipes for Omaha.

American 1 – Liberty 1 (OT) – Liberty drew first blood when forward Tresor Mbuyu found the back of the net in the thirtieth minute with a helper from teammate Jovanni Chavez.  American showed they have grit when they hung in there and responded with a goal from midfielder Joe Iraola out of a free kick from thirty-five yards out to tie it at 1-1. American head coach Todd West stated, "Disappointed to tie, but pleased with our overall performance."  American is now 3-1-3. Liberty is 3-2-2.

New Hampshire 3 – Colgate 0 – Colgate had a 22-6 advantage in shots but New Hampshire dominated in the one statistic that really counts behind goals from Juan Velazquez and Jack Dickson in the first stanza of play and Chris Arling in the second half.  Junior Andrew Pesci had a busy evening between the pipes with twelve saves in goal for New Hampshire. New Hampshire improves to 5-1-0. Colgate is now 4-2-0.

LIU Brooklyn 2 – Rider 1 – All the scoring in this one took place in the second half.  Simen Hestnes alertly sent a deflection of teammate Romario Guscott's shot back into the goal to give the Blackbirds a 1-0 advantage in the sixty-sixth minute. The Broncs responded with a goal from Clement Bourret with a double assist credited to Adrien Huss and Elliott Otmani.  Guscott then came up big with the game-winning goal for LIU in the eighty-six minute after receiving a cross from Rasmus Hansen to give the Blackbirds the edge they needed to secure a good win.   LIU Brooklyn is now 3-2-1.  After beginning the season with four consecutive wins, Rider drops its second contest in a row to go to 4-2-0.  Rider head coach Charlie Inverso stated, "Their defense was pretty solid. I don't think we got into a flow."

Air Force 3 – St. Mary's 2 – Tucker Bone scored from the top of the box in the fifth minute  to give Air Force an early 1-0 advantage. Midfielder Stephen Dougherty scored in the twenty-eighth and forty-fourth minutes to give the Gaels a 2-1 lead that held into intermission.  Trey Pujats scored in the fifty-fourth minute after receiving a cross fom Austin Dewing to knot the score at 2-2 and give Air Force new life. Sophomore defender Jacob Yarnell then scored from fifteen yards out in the seventy-fifth minute with an assist from Luis Martinez to give Air Force the edge they needed to secure the victory. Air Force improves to 4-2-0. Saint Mary's is now 1-4-2.

Canisius 1 – Saint Bonaventure 0 – Thomas Teupen's header in the six minute of the contest proved to be the difference maker in this one for the Golden Griffins.  Redshirt junior Marco Trivellato had three saves in goal to record the shutout for Canisius.  Canisius is now 3-4-0. The Bonnies drop to 0-5-1 year to date.

Seattle 2 – College of Charleston 1 (OT) – College of Charleston got on the board in the eighty-third minute as a result of an own-goal.  Seattle's Ozzie Ramos controlled a loose ball in the box and sent it into the back of the net thirty seconds later to knot the score at 1-1.  The contest went into extra time where Alex Roldan netted the game-winner for Seattle out of a free kick just outside the box.  The Redhawks improve to 3-3-0. The Cougars are now 2-2-1.

Princeton 2 – Boston University 1 – Boston University jumped out to a 1-0 advantage compliments of a goal from Magnus Benediktsson that was set up by a nice cross from Anthony Viteri in the thirty-second minute. Princeton's Vikram Pothuri scored three minutes later to knot it at 1-1. Benjamin Martin netted the game-winner for the Tigers in the second half with a double assist coming from teammates Henry Martin and Daniel Bowkett.  Princeton improves to 2-2-0.  The Terriers drop to 2-2-0.

Cal State Fullerton 1 – San Francisco 0 – Cal State Fullerton gets a nice on the road win with the difference maker being sophomore midfielder Ross McPhie's chip shot into the back of the frame in the fifty-eighth minute of the contest.  Cal State Fullerton head coach George Kuntz stated, "This was a good, gutsy and grity win versus a well-coached opponent."  The Titans improve to 4-3-0 while the Dons drop to 2-4-0.  Paul Andre Guerin had two saves between the pipes to record the shutout for Cal State Fullerton.  The Titans have now won three straight and appear to be gaining momentum.

Santa Clara 1 – SMU 0 – Junior forward Carlos Delgadillo scored from four yards out in the seventy-second minute after receiving a cross from senior forward James Huffer to give Santa Clara the edge they needed to top SMU in Dallas.  Dakota Havlick had eight saves in goal for Santa Clara. The Broncos improve to 4-2-0. SMU continues to struggle and drops to 2-5-0.