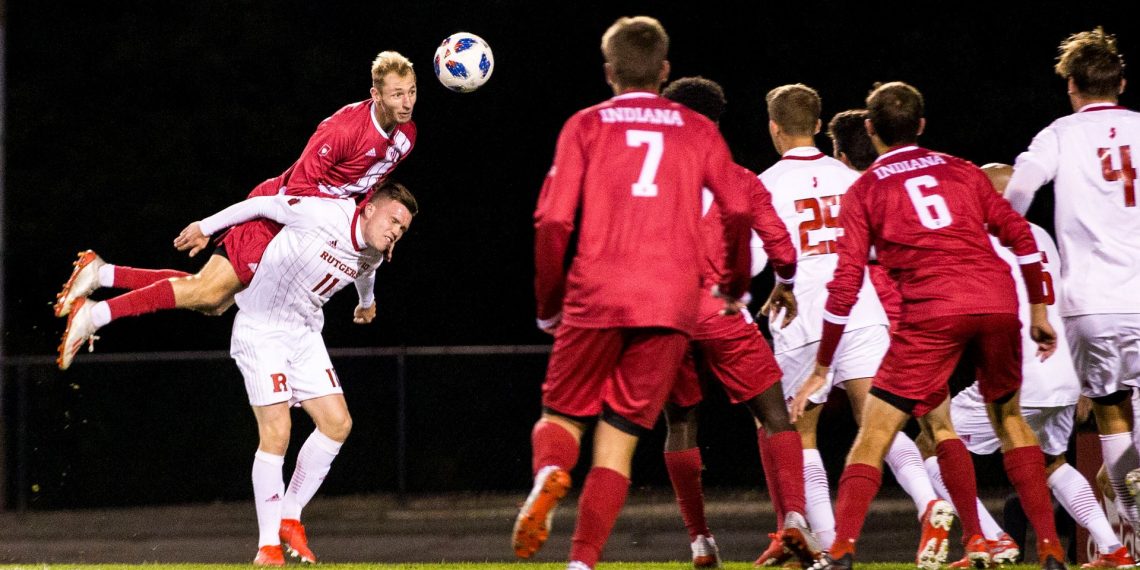 It is gut check time as teams head down the home stretch seeking to peak at the right time with conference tournaments and the NCAA Tournament right around the corner.

Virginia 2 – Virginia Tech 0 – The Cavaliers continue to combine stout play on the defensive side of the ball with an opportunistic attack to secure an impressive on the road win over the Hokies in ACC play. Junior forward Nathaniel Crofts scored what proved to be the game-winner in the thirty-third minute of play when he sent a bending ball into the top right corner of the goal after receiving a cross from sophomore forward Daryl Dike.  Dike sent a one-timer into the back of the frame in the fifty-seventh minute after receiving a through ball from Crofts to give Virginia a 2-0 advantage.  Redshirt junior Colin Shutler had five saves in goal for the Cavaliers to record his twelfth shutout of the year.  Mathijs Swaneveld had two saves between the pipes for Virginia Tech.

Clemson 3 – Boston College 1 – Clemson's high powered offense was in gear once again on senior night at Historic Riggs Field.  The Tigers have found the back of the net a total of fifty-seven times so far this year while allowing a total of only fifteen goals.  Midfielder Robbie Robinson (14g, 8a) scored from ten yards out in the thirty-second minute to give Clemson a 1-0 advantage which they maintained at intermission.  Senior midfielder Tanner Dieterich scored from eleven yards out two minutes into the second half with an assist from Phillip Mayaka to make it a 2-0 contest.  Redshirt freshman forward James Brighton added the third Clemson goal in the sixty-seventh minute with Grayson Barber contributing the helper.  Boston College got on the board in the seventy-eighth minute when Joe Kellett converted a penalty kick.  George Marks had two saves in goal for the Tigers. Giacomo Piccardo and Christian Garner combined for six saves in goal for the Eagles.

Indiana 3 – Rutgers 0 – Indiana's starting lineup included seven freshmen.  The game was scoreless at halftime but the Hoosiers opened it up in the second stanza with goals from senior midfielder Joris Ahlinvi in the fifty-fourth minute, redshirt sophomore midfielder Joe Schmidt in the seventy-second and freshman midfielder Aidan Morris in the seventy-ninth.  Ahlinvi scored from twelve yards out after receiving a long ball out of a free kick put in play by Morris. Schmidt scored after he made a nice move off the dribble to create the space he needed to drive a shot into the back of the frame from twenty yards out after receiving a through ball from Morris.  Morris added the final goal of the evening when he alertly sent the rebound of Thomas Warr's shot back into the net.  Freshman Roman Celentano had a single save in goal to notch the shutout for Indiana.  Freshman Oren Asher had five saves in goal in a losing cause for Rutgers.

Rutgers head coach Jim McElderry stated, "For seventy minutes, we executed our plan well tonight, but the game shifted when they scored their first goal on a set piece, which is disappointing."

Indiana is 10-2-3 with a 5-1-0 mark in Big Ten play. The Hoosiers are undefeated in thirty-five consecutive home contests.  Rutgers is 7-5-3 overall with a 1-5-1 mark against Big Ten opponents.

Maryland 2 – Ohio State 0 – This Big Ten match took place in Columbus.  Maryland got the best of the run of play for most of the match to secure a good on the road win.  Ohio State created several scoring opportunities in the early going but was unable to finish.  Sophomore forward Justin Gielen scored in the thirty-sixth minute after receiving a cross from senior midfielder Eli Crognale to take a 1-0 advantage into intermission.  Freshman midfielder Malcoom Johnston added the second goal from close range in the eighty-fifth minute after receiving a touch pass from Eric Matzelevich.  Niklas Neumann and Russell Shealy combined in goal to notch the shutout for Maryland. Parker Siegfried had four saves between the pipes for Ohio State.

Maryland mentor Sasho Cirovski stated, "I'm very pleased with our performance today. Our goal was to come on the road and get a result against a good team and it was mission accomplished. I was happy with our commitment on the defensive side of the ball and our good balance of possession and penetration."

Louisville 1 – North Carolina 0 – Louisville's up and down season continues with an up as a result of a 1-0 win on the road over a good North Carolina team.  The Cardinals came into the contest off a 2-1 loss at home to Temple.  Sophomore forward Haji Abdikadir scored the lone goal of the evening in the thirty-fifth minute when he sent a shot into the bottom right corner of the goal from the top of the box after recovering the rebound of teammate Kino Ryosuke's shot.  Jake Gelnovatch had two saves in goal to secure the shutout for Louisville.  Alec Smir had two saves in goal for North Carolina.  This one could have gone either way but at the end of the day it came down to the fact that Louisville was able to finish a scoring opportunity while North Carolina was not.

Penn State 4 – Appalachian State 0 – A competitive and steadily improving Appalachian State team traveled to University Park hoping to secure a resume building win over Penn State out of the Big Ten but that was not to be the case. Freshman forward Liam Butts scored in the thirty-fourth minute to give the Nittany Lions a 1-0 advantage that they carried into halftime.  Penn State opened things up in the second half with forward Joshua Dabora, midfielder Aaron Molloy and midfielder Daniel Gonzalez contributing a goal each.

Penn State head coach Jeff Cook stated, "It was an excellent result against Appalachian State that came in here with a great record and are competing for a place in the NCAA Tournament. So I thought the way we approached the game was very satisfying. We got some great goals tonight and I couldn't be prouder with the way we played."

Penn State improves to 9-2-3 and will host Maryland on Tuesday.  Appalachian State is now 9-4-1 and will travel to Chapel Hill on Tuesday to face North Carolina.

Pittsburgh 4 – Duke 3 – In one of the more improbable comebacks of the year, Pitt comes from three goals down to top Duke in this ACC contest.  It was a huge confidence builder for Pitt and a heartbreaking loss for Duke.  Max Moser, Suniel Veerakone, and Daniel Wright scored as Duke had what appeared to be an insurmountable 3-0 lead over Pitt in the thirty-seventh minute of the contest.  Pitt pulled one back when Edward Kizza scored in the forty-first minute after receiving a pass from Alexander Dexter.  Duke went into halftime with a 3-1 lead. The contest was all Pittsburgh in the second stanza with Velijko Petkovic, Jackson Valti and Alexander Dexter scoring to give the Panthers a huge come from behind win in conference play.  Dexter's game-winner came in the eighty-sixth minute of play when he controlled and sent a rebound into the back of the net.

Pitt head coach Jay Vidovich stated, "I don't care where you are in a program, but if you come back 3-0 in a match like that, just the belief factor that can bring to you, to not quit and to find a way to keep pushing and discover a way to find a goal and to keep yourself in it is one of the biggest things."

Michigan 1 – Wisconsin 1 (ot) – Defense ruled in this Big Ten battle.  Michigan got on the scoreboard with an own goal in the seventy-fifth minute.  Senior midfielder Noah Leibold converted a penalty kick two minutes later for Wisconsin to knot the score at 1-1. Andrew Verdi  who had three stops and freshman Owen Finnery split time in goal for Michigan. Dean Cowdroy had four saves in goal for Wisconsin.  Michigan had a seventeen to eight advantage in shots for the evening.

Northern Illinois 3 – Western Michigan 2 – This MAC contest included several momentum swings.  NIU jumped out to a 2-0 advantage with goals from senior forward Jan Maertins in the twenty-third minute and sophomore defender Anthony Markanich in the twenty-seventh minute. Western Michigan responded with a goal from Antonio Rizzo in the thirty-eighth minute of play to make it 2-1 at halftime.  Western Michigan then tied it at 2-2 with Charlie Sharp contributing the goal.

Maertins then netted his second goal of the evening for NIU and what proved to be the game-winner from eight yards out in the seventy-sixth minute of play. The game-winning goal was set up by a nice combination of passes from Anthony Markanich and sophomore forward Nick Markanich.

NIU head coach Ryan Swan stated, "Western Michigan are a fantastic team, so when they brought the game back to 2-2, we were a little nervous. You need players to make big plays in big games, Martin (Sanchez) stepped up huge with the penalty save and Jan (Maertins) finding a winner. It was a big gut check for us, and it was a big step forward for the program."

UNLV 4 – Kansas City 1 – UNLV started slowly but they  took charge of this WAC contest once their offense got into a rhythm.  Redshirt junior midfielder  Ryan Connor broke the ice for the Rebels when he scored in the forty-third minute to give UNLV a 1-0 advantage at halftime.  Senior midfielder Timo Mehlich then took over the match scoring three times in the second half for UNLV.  Kevin Komodi netted the lone goal for Kansas City.  Lukas Betz had one save between the pipes for UNLV. Filippo Errico had a five save evening in goal for Kansas City.

Seattle 2 – Air Force 1 – Noe Meza sent a header into the far post with a double assist from Hal Uderitz and Declan McGlynn in the closing minutes of the first half to give Seattle a 1-0 lead.  Hal Uderitz converted a header in the sixty-sixth minute after receiving a well played and timed cross from Burke Fahling to give Seattle a 2-0 advantage.  Quinn Matulis scored three minutes later for Air Force to pull within a single goal but that concluded the scoring for the evening.

Seattle head coach Pete Fewing stated, "It was good to get a win and stay in first (in the WAC standings). We scored two excellent goals that came out of strong buildups.  Air Force is a tough team to play."

Akron 3 – SIUE 0 – Akron came out swinging with Mani Austmann placing a shot into the  top right corner of the goal in the fourth minute of play after receiving a pass from David Egbo to go up 1-0.  Egbo make it 2-0 when he placed a shot into the corner of the frame with an assist from Henrique Cruz in the thirty-seventh minute.  Akron maintained a 2-0 advantage at halftime.  Will Jackson contributed the final score for Akron in the last minute of regulation with Egbo and Pol Hernandez credited with a double assist on the play.  Tor Saunders had two saves in goal for the Zips. Noah Heim had two stops in goal for SIUE.

UTRGV 1 – California Baptist 0 – Senior midfielder Angel Lopez's goal with a little over a minute remaining in regulation gave UTRGV the edge they needed to secure a 1-0 win on the road over CBU. The game-winner came out of a free kick put in play by senior defender Dimitris Stantzalis to senior midfielder Arthur Roger who redirected it to Lopez.  A solid UTRGV defense limited California Baptist to only three shots.  Andy Rios recorded the shutout in goal for UTRGV. Albert Escuin had six saves in goal for CBU.