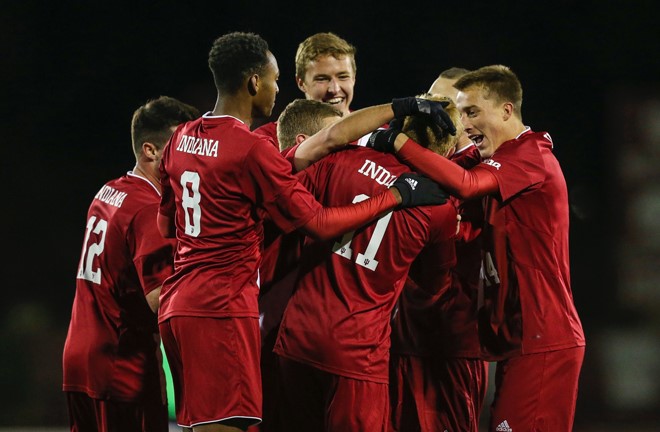 Akron, North Carolina, Fordham, Indiana, and Michigan State prevail on Saturday to survive and advance to the Elite Eight. Three more will secure a spot on Sunday to round out the field.  The road to the College Cup continues.

Akron 3 – Wisconsin 2 (ot) – The seniors on both teams came up big as they have all season in this clash between two teams who have had banner seasons.  Both teams displayed the proficiency on the offensive side of the ball and the determination that have served them well but in the end Akron prevailed in overtime when sophomore Marcel Zajac sent a ball in from the side of the pitch that senior forward Stuart Holthusen controlled and sent into the back of the frame to net the game-winner for the Zips in the ninety-second minute of the contest.

Senior forward Sam Gainford scored from twenty-five yards out in the fourteenth minute of the match to give Akron a 1-0 lead.  Wisconsin responded when senior forward Chris Mueller made a nice move down the side to open the field of play and sent a ball into the center of the box which senior midfielder Mike Catalano sent into the back of the goal to tie it at 1-1 in the twenty-sixth minute of the match.  The score remained 1-1 at halftime.

Gainford then gave Akron a 2-1 advantage in the sixty-seventh minute when he sent a bending ball into the corner of the frame after receiving a pass from redshirt senior midfielder Manuel Cordeiro.  Mueller and Catalano then teamed up again ten minutes later with Catalano directing the ball into the back of the net out of a free kick served in by Mueller.  The contest remained tied at 2-2  at the end of regulation which set the stage for Houlthusen's golden goal that sent Akron to the Elite Eight where they will meet the winner of the Louisville and Colgate contest which will take place on Sunday.

Philipp Schilling had two saves in goal for Wisconsin while Ben Lundt had three saves between the pipes for Akron.

North Carolina 2 – SMU 0 – The number three seeded Tar Heels  advance to the Elite Eight for the eighth time in the past ten seasons.  Two high powered offensive teams squared off in this one.

UNC had a 5-0 advantage in shots during the first half of play but a stout SMU defense anchored by netminder Michael Nelson contained the Tar Heel attack and the teams went into intermission with the contest scoreless.

The Tar Heels got the breakthrough  that they were looking for just four minutes into the second stanza when sophomore midfielder Jack Skahan sent a cross into the box that was intended for senior forward  Alan Winn but nonetheless found its way into the back of the frame.

Forward Jelani Pieters netted the insurance goal for North Carolina in the eighty-second minute of the contest  from the top of the box after receiving a nice back heeled pass from Cam Lindley that opened up the field of play and gave Pieters the space he needed to push forward off the dribble and score.

Nelson had a four save evening in goal for SMU while James Pyle had one save in goal to secure the shutout in goal for the Tar Heels along with the backline of Alex Comsia, John Nelson, and Mark Salas.

SMU under the direction of head coach Kevin Hudson concludes the 2017 campaign with a 17-3-1 record and the most wins the Mustangs have recorded in a single season since 2006.

Number six seeded Duke looked like they might take control of the contest when senior midfielder Brian White headed in a cross played in by teammate Max Moser in just the eighth minute of the match to go ahead 1-0.  However Fordham tightened up on the defensive side of the ball and the contest remained 1-0 at half time.

Fordham then got new life to knot the score at 1-1 when Jannik Loebe scored from inside the box in the fifty-third minute after receiving a well played cross from sophomore Bart Dziedzic.   Duke responded ten minutes later when defender Matthias Frick scored out of a corner kick served in by midfielder Max Moser to White who  set the goal up with a flick to Frick to make it 2-1 Duke.  It felt like that goal might be the difference maker but Fordham dug deep once again to knot the score at 2-2 when Dziedzic  alertly controlled a loose ball in the box and tapped it into the back of the net.

Fordham advances to face North Carolina in the Elite Eight.  The Tar Heels will be the third consecutive team the Rams have faced from the ACC.  It was a heartbreaking outcome for a Duke team that concludes a very successful season with a 13-4-3 record.

Indiana 2 – New Hampshire 1 – The still undefeated number two seeded Hoosiers top the Wildcats to remain undefeated and advance to the Elite Eight for the first time since 2012 where they will host fellow Big Ten Conference member Michigan State thus ensuring that the Big Ten will have a representative in the four team College Cup.

The Hoosiers jumped out to a 1-0 advantage when redshirt junior midfielder  Cory Thomas placed a header into the upper right corner of the goal from twelve yards out after receiving a cross from defender Rece Buckmaster.  Both sides had four shots in the first stanza of play but the contest remained 1-0 when the teams headed into intermission at the conclusion of forty-five minutes of play.

Indiana upped their lead to 2-0 when midfielder Francesco Moore converted a penalty kick in the sixty-fifth minute of the match.  New Hampshire continued to press the attack and narrowed the gap to 2-1 when freshman Jacob Gould scored out of free kick put in play by defender Dante Lamb in the seventy-seventh minute.   That concluded the scoring for the evening.

New Hampshire out of the America East Conference played its way into the Sweet Sixteen for the first time in the history of the program by  topping Fairfield 3-0 and advancing past Dartmouth in penalty kicks after the contest was scoreless.  The Wildcats conclude a very productive season with a 13-4-5 overall record.

Western Michigan took a 1-0 lead in the twenty-fifth minute and brought the Western Michigan fans to their feet when sophomore midfielder Pepe Martinez made a nice move to create the space and the angle he needed to skillfully chip a shot into the back of the net from five yards out after receiving a pass from senior forward Jay McIntosh.

With two minutes remaining in the first half, forward Hunter Barone came up big for Michigan State when he netted the equalizer after a solid combination of passes out of a give and go situation with midfielder Giuseppe Barone.  The goal gave Michigan State momentum and sent the two teams into intermission tied at 1-1.

Senior defender  Jimmy Fiscus alertly scored what proved to be the game-winning goal in the fifty-fourth minute out of a free kick served in by junior defender Connor Corrigan that was redirected to Fiscus by  John Freitag.  Michigan State then clamped down on the defensive side of the ball to maintain the 2-1 advantage to survive and advance to the Elite Eight where they will face number two seed Indiana in Bloomington.  The Spartans and the Hoosiers tied 1-1 when the two squared off in East Lansing on October 29 in regular season play.

Drew Shepherd had four saves in goal for Western Michigan.  Jimmy Hague had one save between the pipes for Michigan State.

As expected, no prisoners were taken in this rivalry contest which had a combined total of twenty-five fouls.

Michigan State improves to 13-3-3 while Western Michigan concludes a impressive breakthrough 2017 campaign with a 17-4-1 record, the best in school history.  Seniors Brandon Bye,  McIntosh, Shepherd, and Zach Bock conclude their tenure at Western Michigan as the winningest class in the history of the program.

Western Michigan head coach Chad Wiseman stated, "All-in-all I don't think we could ask for a better season.  Over the past four-five years we have changed the culture of Western Michigan men's soccer and have built a championship and national-caliber program."