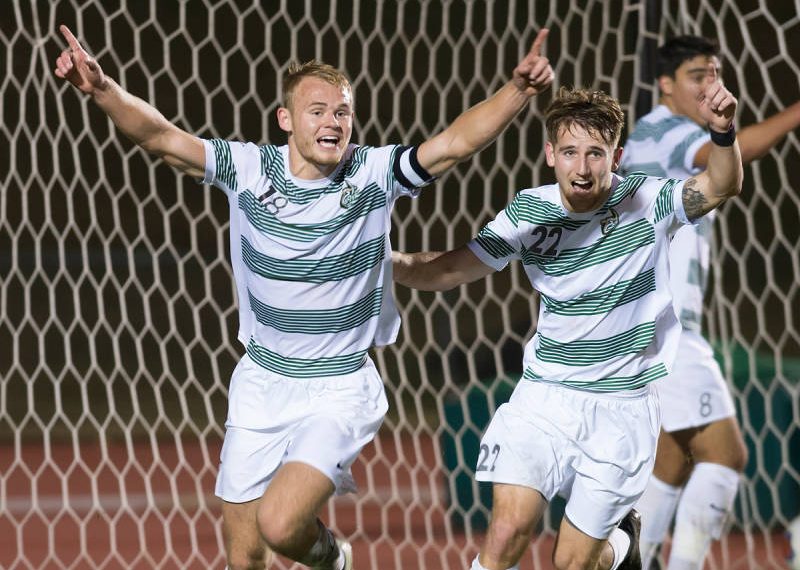 Charlotte (11-5-3) at Wake Forest (15-2-2) – The 49ers are playing with house money which makes them a dangerous team. Their 2-1 win over Radford in the first round of play got them back in the win column in the NCAA Tourney for the first time since the 2012 season in which they played their way into the College Cup. The 49ers have always been a team with stamina so it is highly unlikely that they will enter the contest leg weary as a result of having played Thursday night. Charlotte has come close in several big games this year and they are due for a win. Clearly for that to happen they will have to play their best game of the year. The Demon Deacons have had an outstanding season and they deserve to be the number one seed. They also have the advantage of playing at home in the friendly confines of Spry Stadium which should be packed. Nonetheless should Wake Forest falter they could come out on the short end of this one.

Connecticut (10-5-6) at Indiana (12-4-3) – This is not a banner UConn team but they are very capable of playing lock down defense and defense wins games in the survive and advance environment of the NCAA Tourney. Connecticut's attack has also signficantly improved from a productivity standpoint in their last few games as reflected in their first round 3-1 win over Boston University. Connecticut has characteristically not played their best soccer of the year during the NCAA Tournament and Ray Reid clearly deserves a break in that regard. The law of averages could work in their favor in this one if the Huskies remain focused on doing what they do best, keep their composure, and play a full ninty minutes of soccer.  On the other hand Indiana tends to play their best soccer at this time of the year. No one with the exception of Jerry Yeagley knows better than Todd Yeagley how to prepare Indiana mentally and physically for the rigors of the NCAA Tourney so IU will be prepared and the crowd on hand will be solidly behind the Hoosiers.  Nonetheless all things considered this one is a good candidate for the upset watch list.

Santa Clara (11-7-1) at Stanford (14-2-2) – On paper this one is all number eight seed Stanford but Santa Clara is on a roll of late. The Broncos are peaking at the right time and are undefeated in their last seven contests. Sophomore forward Carlos Delgadillo is the kind of player who makes good things happen on the offensive side of the ball and Kendall McIntosh is a prime timer between the pipes who will not be intimidated by Stanford's record or players. If both teams play to their potential Stanford will prevail as the Cardinal has a few top notch play makers of their own and this is without a doubt the strongest team from top to bottom that Jeremy Gunn has put on the pitch in the three years that he has been at the helm of the program at Stanford. There is always the chance that Stanford could run away with this one but should they look past Santa Clara or not be on their game the potential exists for an upset in this one.

Coastal Carolina (13-2-4) at North Carolina (14-1-3) – Coastal Carolina has not been playing their best soccer of late but this is not for lack of effort. Injuries have had something to do with that. The Chanticleers are no stranger to the NCAA Tournament nor is this their first rodeo in terms of playing in the second round or playing against North Carolina. Coastal's effectiveness on the defensive side of the ball is often overlooked due to their productiivity on the offensive side of the ball. The Chanticleers have allowed a total of only twelve goals to date against a very competitve slate of opponents. Coastal Carolina will arrive in Chapel HIll believing that they can leave with a vicotry. The number five seeded Tar Heels are for real themselves on both sides of the ball having put a total of thirty-seven in the back of the net lead by Tucker Hume, Alan Winn, and Zach Wright among others while holding opponents to a total of only thirteen. This one has the potential to be one of the best second round contests and belongs on the upset watch list.

SMU (14-2-4) at Denver (15-0-3) – Both of these teams have had banner seasons under first year head coaches. The future looks bright for both programs but both are focused on the present for now. Number thirteen seed Denver is undefeated with many expecting them to validate the success they have enjoyed during the season to date with at least a win or two or perhaps more in the NCAA Tourney. The pressure so to speak is on the Pioneers in that regard. SMU's Mauro Cichero gives SMU big play ability and redshirt sophomore Michael Nelson has been very good in goal. Denver has a lot of talent and what they have accomplished is by no means a fluke. The Pioneers also have the home field advantage but SMU is very capable of pulling off the upset in this one if they continue to do the things that have worked for them all year. This looks to be another great second round contest. Give it a spot on the potential upset list.