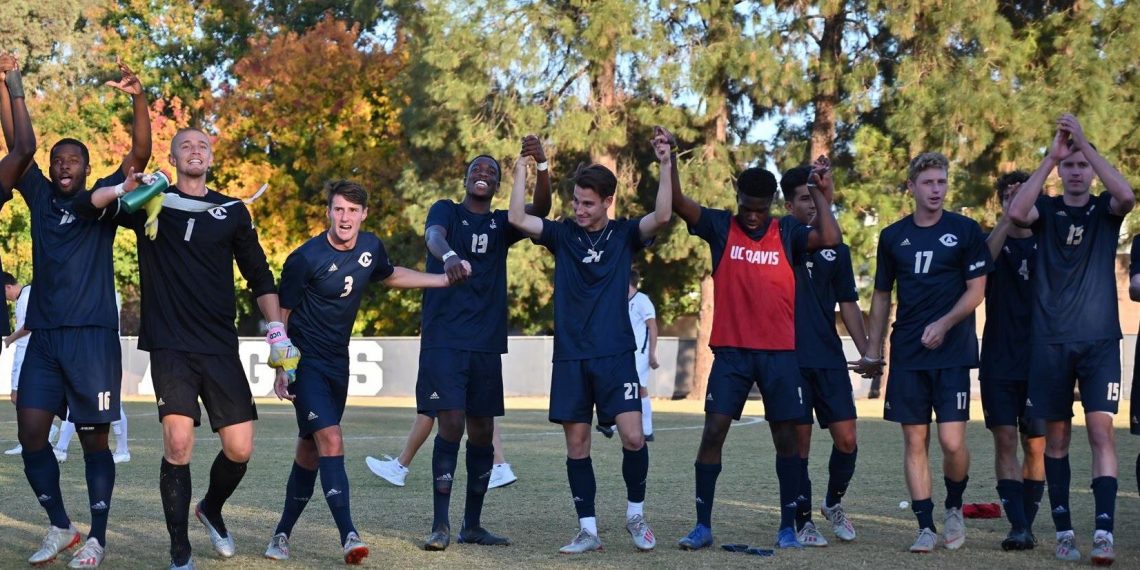 There are plenty of great college soccer games on tap this weekend as teams vie for NCAA Tournament berths and seeding in the NCAA Tournamet. Six of the most intriguing are outlined below.

UC Santa Barbara (12-3-4) vs. UC Davis (12-4-2) – The Gauchos and Aggies collide on Friday night in Davis, California with the Big West Conference title on the line and the automatic berth in the NCAA Tournament that accompanies it.  The two teams tied 1-1 when they faced each other in Davis on October 23. This is a gut check "something has to give" contest which makes it among the more interesting and exciting championship matches.

Defense has been UC Davis' calling card.  Veteran senior netminder Wallis Lapsley and junior backs Nabi Kibunguchy and Jake Haupt are part of a Aggie defense that has only allowed a total of twelve goals and posted eight shutouts. Adam Mickelson (4g, 5a) is the go-to guy on the offensive side of the ball for UC Davis.

The Aggies are no stranger to the championship match having played their way into it the past three years. UC Davis belongs on the short list of teams for which the sum of the whole is greater than the sum of the individual parts. In other words, they play well together as a team which is a big plus and advantage in a sport in which there are so many moving parts.

UC Santa Barbara has not fared well in Big West Tournament play and are highly motivated to get that monkey off their backs. The Gauchos are making their first appearance in the Big West championship game since 2015. One of the keys for the Gauchos is finding the right balance between applying pressure on the offensive side of the ball and remaining organized defensively.  Forward Rodney Michael (5g, 8a) and attacking midfielders Thibault Candia (6g, 6a) and Fin Ballard McBride (9g, 2a) add punch to a UCSB attack that has netted a total of thirty-seven goals so far this year. They are difference makers who equip UCSB with the type of playmaking ability that UC Davis may have difficulty containing for a full ninety minutes. Sophomore goalkeeper Ben Davis, backs Noah Billingsley and Hunter Ashworth and defensive midfielder Sahid Conteh are among the members of a Gaucho defense that has allowed eighteen goals.

Statistically UC Davis has the edge on the defensive side of the ball while UC Santa Barbara has been more productive on the offensive side. Forget that, the outcome of this one is going to be going to be determined by which team maintains its composure, does the things well that have gotten them to this point, and gets into a rhythm early on.

Providence (14-5-0) vs. Georgetown (14-1-3) – This Big East Tournament final which will take place on Sunday in Washington belongs on the upset watch list. Georgetown is among the most talented teams in the country but Providence comes into the contest with a ton of momentum with a resume that includes six consecutive wins during which they have outscored their opponents fourteen to four.  Georgetown comes into the Big East Championship match off a 1-1 tie with Creighton and a 2-2 tie with Butler.

This one will likely be decided by who is able to get the best of the run of play in the middle third of the field with Georgetown's Jacob Montes and Sean Zawadski and Providence's Tiago Mendonca, Paulo Lima and Danny Griffin among those who will have an impact on that. Chances are pretty good that the play of redshirt senior back Joao Serrano for Providence and Georgetown senior back and team captain Dylan Nealis will also figure into the outcome since both have demonstrated big play ability all year.

Georgetown defeated the Friars when the two teams faced each other back on September 28 but that is ancient history at this point. The Hoyas are tough to top when they get into a rhythm but they are vulnerable when they are not. Georgetown could be in trouble if they come out flat against a confident Providence team that seems to be playing its best soccer of the year at the right time.

Indiana (13-2-3) vs. Maryland (10-6-2) – Indiana returns to the scene of the crime in this Big Ten Tournament semifinal contest which is slated for Friday in College Park, Maryland.  The Terps gave the Hoosiers a wakeup call when they halted their thirty-two match Big Ten regular season unbeaten streak with a 3-0 win in College Parkback on October 18. Maryland took a 1-0 lead in the fifteenth minute of play in that contest and never looked back. The Hoosiers had a ten to eight advantage in shots but none of them were on goal. Indiana's defense anchored by Jack Maher, Simon Weaver and Spencer Glass among others and freshman goalkeeper Roman Celentano will need to do a better job of handling the pressure that Maryland will bring, particularly in the early going, if they want to avoid a repeat of what happened in the last contest.

Maryland has played very well at times but lapses in play on the defensive side of the ball perhaps fueled by injuries have hampered their consistency and effectiveness.  This is a very good but not vintage Maryland team with a small margin for error. That means they have to put together a full ninety minute shift, as they did when they faced IU during regular season play, in order to top the Hoosiers. Maryland matches up well with Indiana so if they play with the same level of intensity that they did in the prior contest they have a good chance of advancing to the championship game.  Midfielder Eli Crognale (4g, 5a) and forward Eric Matzzelevich (5g, 1a) are keys to the Terp attack. Backs Johannes Bergmann, Brett St. Martin, and Ben and Matt  DiRosa anchor the defense along with freshman netminder NIklas Neumann.

Clemson (16-1-1) vs. Virginia (16-1-1) – This Atlantic Coast Conference championship game will take place on Sunday at WakeMed Soccer Park in Cary, North Carolina. It is a classic!  The two teams didn't face each other during regular season play. College Soccer News has Virginia as the number one team in the country and Clemson as the number two team.  Both teams look to be set for one of the top four seeds in the upcoming NCAA Tournament but this one will impact which seed.

Both teams play well on both sides of the ball but Clemson is among the best in the country on offense with an attack led by Robbie Robinson (15g, 9a), Kimani Smith (13g, 5a), Grayson Barber (9g, 8a) and freshman Philip Mayaka (2g, 8a) that has scored a total of sixty-four goals against a highly competitive slate of opponents.  On the other hand, goalkeeper Colin Shutler and backs Henry Kessler, Andreas Ueland and Robin Afameufuna are part of a Virginia defense that has only allowed a total of six goals while playing a very demanding schedule.

Lafayette (9-6-5) vs. Lehigh (12-4-3) – This Patriot League title match will take place Saturday with number one seed Lehigh hosting number four seed Lafayette at Ulrich Sports Complex. The number one seed would normally be the favorite but you can forget seeding when it comes to the Patriot League Tournament where more often than not the higher seed, particularly the number one seed, does not prevail. In addition, the two teams tied 0-0 in a game that featured forty fouls when they squared off on October 26 at the Ulrich Sports Complex.

Expect no prisoners to be taken in this one which will likely be a defensive battle with the winner being the side that does not squander the scoring opportunities that come their way.  Fasten your seatbelts as this one should be a battle.  A single goal could prove to be the difference.

Michigan (10-4-4) vs. Penn State (12-2-3) – This Big Ten semifinal game will be played on Friday at Ludwig Field in College Park, Maryland. The Wolverines have had somewhat of an up and down season but look to be on an upswing with a 4-0-1 mark in their last five contests that included wins over Notre Dame 1-0 and Maryland 4-2. Michigan is a dangerous team with an attack powered by Nebojsa Popovic (10g, 3a) and Jack Hallahan (4g, 6a) among others and a midfield driven by playmaker Marc Ybarra (0g, 8a. ). Freshman Owen Finnerty has been the starter in goal for the past three games taking over for the injured Andrew Verdi who was named the 2019 Big Ten Goalkeeper of the Year.

Penn State has had a banner season and will come into this game with a 7-0-1 mark in their last eight contests. This is Penn State's first appearance in the conference semifinal since the 2009 season so they are sailing in uncharted waters.  Senior midfielder  Andrew Molloy (8g, 6a), freshman forward Liam Butts (9g, 1a) who has five game-winners, and senior forward Christian Sload (5g, 5a) have played key roles in the success that Penn State has enjoyed on the offensive side of the ball this year.  Look for them to put pressure on Finnerty and the Michigan backline.

The two teams tied 0-0 when they faced each other in regular season play. Michigan will likely press the attack in the early going but that should even out as the game progresses. Penn State has been the more consistent team throughout the year but Michigan seems to have renewed energy and focus. Whoever scores first will have a huge advantage but it may take two goals to secure the win in what looks to be a contest that could go either way.