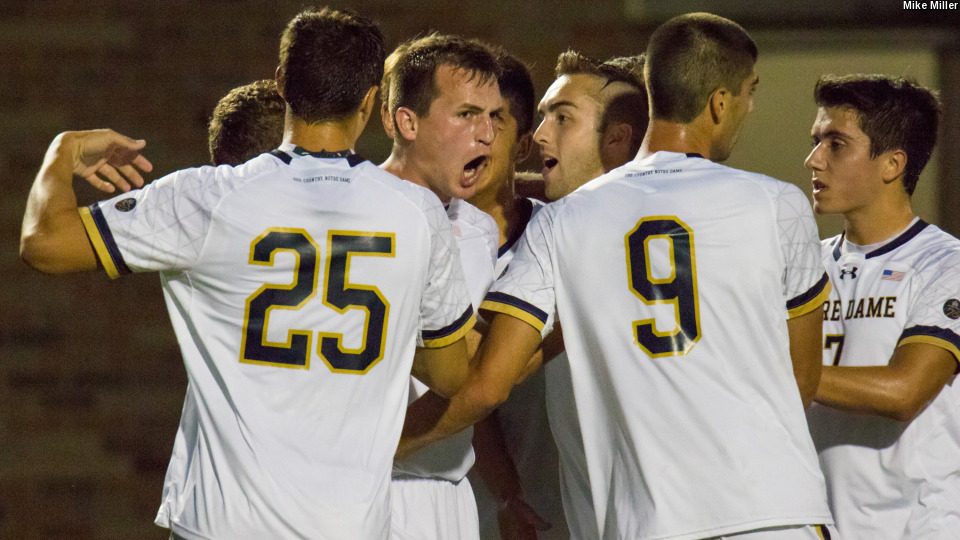 Stanford just completed five consecutive contests at home. Their next four contests are on the road including Pac-12 contests with San Diego State California and UCLA.  Look for the ability of the Cardinal to come up with the big plays when needed to prevail in the close contests and their toughness away from home to determine how they fare particularly as they face the challenge of opponents who may pack the back.  Senior forward Foster Langsdorf  (6g, 1a) will continue to be a tightly marked man which means others will need to take advantage of the opportunities that come their way to add to the attack.  Jeremy Gunn has done a good job of giving his highly regarded newcomers experience which should bode well for the Cardinal as the season progresses.

Maryland entered the season with a ton of experienced finishers but with unanswered questions on the defensive side of the ball due to departures.  The season is still young but to date the Terp backline of Johannes Bergmann, Miles Stray, Donovan Pines, George Campbell, and Chase Gasper and sophomore goalkeeper Dayne St. Clair have been solid allowing a total of only four goals while the offense has placed fifteen in the back of the net.  Maryland is 6-0-1 with a 2-0-1 mark in Big Ten play.

The ability of Indiana’s newcomers to make an immediate contribution was viewed as a critical success factor in 2017.  Critical success factors included offensive productivity and the play between the pipes. Freshmen forward Mason Toye (3g, 1a) and freshman goalkeeper Trey Muse are among the members of a highly regarded recruiting class who have hit the ground running for an IU team that is 5-0-2 with a 2-0-1 mark in Big Ten action.  The Hoosiers host Rutgers on Friday and non-conference foe Notre Dame next Tuesday in a contest that has national implications.

Notre Dame is off to a strong start in part due to the offensive productivity of the forward duo of Jon Gallagher (5g, 0a) and Jeff Farina (4g, 2a). That duo has accounted for nine of the thirteen goals the Irish have netted to date.  It is also noteworthy that a very tenacious Notre Dame defense anchored in goal by Chris Hubbard has allowed a total of only three goals while recording a 6-0-0 overall record.  Notre Dame will put their win streak on the line when they travel to Blacksburg to face Virginia Tech on Friday. Bobby Clark’s squad will try to avoid a repeat of the 2016 season when they started strong and then struggled down the home stretch.

Akron is 2-2-1.  You need look no further than the fact that the Zips have been held scoreless in three out of their five contests and have netted a total of only five goals in five contests with three of them coming in their 3-1 win over UC Santa Barbara to discover why it could be a challenging season for an Akron team that normally has a very high-powered offense.  The Zips will host a good UMass Lowell team on Sunday followed by a very good Michigan State squad next Wednesday.

Who would have predicted that a Denver team that had fifteen wins with one loss in 2015 and twenty wins with only one loss in 2016 would begin the 2017 campaign with a 4-4-0 record.  After winning their first two contests the Pioneers have inexplicably stumbled with losses to Furman 1-0, UC Irvine 1-0, CSUN 2-0 and Saint Mary’s 1-0.  Denver looks like a team that is playing not to lose instead of to win. It is gut check time for the Pioneers.

Few players are making more of an impact than Western Michigan midfielder Brandon Bye who has found the back of the net six times to date and contributed four assists for a Bronco team that will enter its contest with Michigan on Wednesday averaging 2.25 goals per game and sporting a 7-0-1 record. A win over Michigan would be a big resume, confidence, and credibility builder for Western Michigan.

The good news is that Ohio State has rebounded from a disappointing 2016 season during which they won a total of five games to record a 6-1-0 record so far in 2017 that is highlighted by six clean sheets including their last five contests in a row.  The Buckeyes are 3-0-0 in Big Ten play that includes wins over Penn State, Northwestern, and Rutgers. The challenging news is that the Buckeyes have Big Ten contests remaining on their dance card with Michigan, Michigan State, Indiana, Maryland and Wisconsin.  There is reason for cautious optimism at Ohio State but the jury is still out since the level of competition looks to be much tougher as the season progresses.

UNCW out of the Colonial Athletic Association gained credibility on the national stage with a signature 1-0 win over North Carolina and a close 2-1 loss to Virginia in Charlottesville in overtime.  However, the reality is that the margin of error for the Seahawks as it relates to maintaining a high national ranking is very unforgiving and slim.  That means UNCW which is currently 5-1-0 must continue to win beginning with what looks to be a very challenging CAA contest on the road this Saturday against a good William and Mary team.

Xavier is looking good.  The Musketeers jumped into the national rankings this week including a number twenty-three ranking by College Soccer News after rolling out to a 5-1-1 overall record that includes a gutsy 1-0 win over fellow Big East member Georgetown last Saturday during which forward Samson Sergi netted the game-winner in overtime. After a season opening loss to Loyola Chicago the Musketeers are undefeated in their last six contests heading into a very difficult contest with Kentucky on the road Wednesday night followed by a contest with St. John’s in Queens on Saturday.  The outcome of those two contests should be very telling for a team that seeks to get back on track after going 8-8-3 in 2016.

Bowling Green out of the MAC roared out to a 5-0-0 record before losing their next three contests to stand at 5-3-0.  Credit Eric Nichols’ team with playing a challenging schedule.  Two of the Falcons three losses have been to Michigan State 1-0 and Notre Dame 2-1 in which they have battled to the end. Things don’t get any easier for Bowling Green with Ohio State in Columbus on Friday their next opponent.  The level of competition should help prepare the Falcons for MAC play.

Michigan State has rocketed up the rankings with an impressive 7-0-0 record that includes a 1-0 win over Michigan last Sunday.  The Spartans will host Maryland on Friday night in what shapes up to be one of the marque contests of the weekend.  Michigan State has been awesome on the defensive side of the ball allowing only one goal in seven contests. Maryland on the other hand has one of the most explosive offensives in the country.  Something has to give in this one.

Count the SMU Mustangs among the teams that appear to be rebounding from a disappointing 2016 season.  The Mustangs are 6-1-0 with their only loss to date a 3-1 setback on the road to Stanford.  Senior forward Mauro Cichero and sophomore forward Garrett McLaughlin have each found the back of the net five times so far this year to provide punch to the Mustang attack while back Jordan Cano and goalkeeper Michael Nelson have been a part of an SMU defense that has allowed a total of six goals. The Mustangs have a gut check contest slated for Sunday when they tangle Tulsa on the road in a key early season American Athletic Conference match up.

As expected the Atlantic Coast Conference is loaded again this year with Wake Forest, Notre Dame, North Carolina, Clemson, Virginia, Louisville, Syracuse and Duke all ranked in the top twenty in the latest College Soccer News Top 30 National Poll.  However, with conference play getting underway, teams in the ACC will begin to knock each other off therefore impacting win-loss records.

Seattle and Air Force are both 6-1-0 and look at this point to be the teams to beat in the Western Athletic Conference.  Seattle led by Cody Gibson who has found the back of the net five times in the last three games has a big test coming up on Sunday when they face rival Washington out of the Pac-12. Air Force travels to face Gonzaga on Friday. Utah Valley has been up and down with a 3-3-0 record that includes a season opening win over Akron but losses to CSUN, Sacramento State, and Seattle.

The Big Ten looks to be very competitive this year which bodes for an interesting conference race.  Maryland, Indiana, Michigan State, Michigan, and Ohio State are all off to a promising start with a collective 28-2-5 overall record.

Keep an eye on Brown out of the Ivy League.  The Bears began the season with wins over Bryant, Quinnipiac, Holy Cross and Tulsa before losing to SMU 1-0 in Dallas.

SIUE entered the season with high hopes of buildig on the success they enjoyed in 2016.  However, they began the season with losses to Michigan State, Syracuse, and Lipscomb before rebounding to top Memphis, Valparaiso, and Princeton. Their three game win streak came to an end last Sunday when they sustained a disappointing 2-0 loss to Penn. Lapses in play have hampered the Cougars at times this year.  To get back on track and perform to their potential in MAC play they are going to have to consistently put together a full ninety minutes of play.

The Pac-12 Conference race features a home and away series. It is crucial for teams in the Pac-12 to hold serve in conference contests when playing at home. Stanford remains the team to beat but it iis highly unlikely that they will run the table.

North Carolina will tangle with Virginia on Friday night in Charlottesville in a marque contest that has huge implications in the ACC race as well as on the national scene.  The Tar Heels have a high powered and balanced attack powered by Alan Winn (6g, 1a), Jelani Pieters (4g, 3a) and Cam Lindley (2g, 7a) that when in gear can score in multiples.  Virginia is equally explosive on the offensive side of the ball lead by Edward Opoku (5g, 2a).  This one should be a dandy.

New Hampshire (5-0-2), Western Michigan (7-0-1), Fairleigh Dickinson (5-0-1), and UMass Lowell (4-1-1) are among the teams from mid-major conferences that to date have made their presence known on the national scene. Time will tell if they can sustain it.

Furman began the season with six consecutive wins including solid 1-0 wins over Denver and Air Force on the road before coming out on the short end of a 1-0 contest Tuesday night against in-state rival South Carolina.  Solid team defense has played a key role in Furman’s success to date. The Paladins recorded shutouts in four of their first six contests and have allowed a total only four goals in seven contests.

NJIT out of the ASUN Conference is off to a good start with a 5-1-2 record. The Highlander attack is powered by senior forward Mamadou Guirassy who leads the country in goals scored with nine.

UCLA’s 2-3-0 record is a little misleading.  The Bruins have traveled to the east coast twice.  On their first trip, they lost to Maryland 3-2 in overtime and were topped 1-0 by Georgetown.  On their second trip on Tuesday, they were defeated 3-0 by Clemson.  It is challenging to travel cross country and win particularly in the early part of the season regardless of the opponent.  Regardless the bottom line is that UCLA currently has a losing record and they have a hole to dig out of. How they respond will depend a lot on the heart and mettle of this team. Look for the Bruins to stabilize and get their legs back under them as they return home to host CSUN and Pac-12 foes California and Stanford.