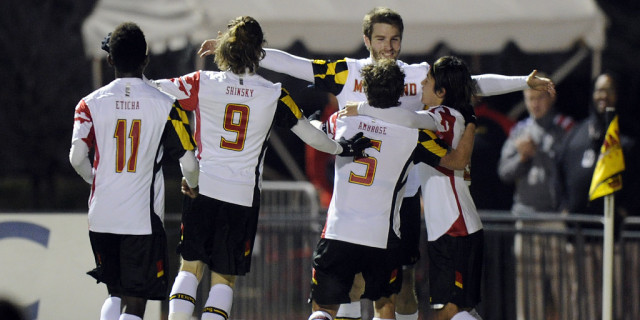 CHESTER, PA – December 13 – Maryland will play Notre Dame in the College Cup final on Sunday after a tense 2-1 victory over ACC rival Virginia at PPL Park.

Patrick Mullins gave the Terrapins the lead with just 10 minutes on the clock after a superb lob, and while Maryland looked for a second goal they were unable to create many clear chances.

Mullins doubled Maryland’s advantage in the second half, and despite a Todd Wharton penalty and several other good attacking moments, Virginia was unable to find an equalizer.

Virginia was at full-strength for this game, with Philadelphia Union Academy product Darius Madison up front for the Cavaliers.

The Terrapins also had a strong side, including MAC Hermann Trophy finalist Mullins and the highly-rated sophomore Schillo Tshuma alongside him in attack.

After a cagey start, it was Maryland who took the lead as Mullins took down Mikias Eticha’s lobbed pass and chipped it over Calle Brown in the Virginia goal to give his side the lead.

The goal seemed to sting the Cavaliers into life, and they came roaring back to dominate possession, but were unable to penetrate the Maryland defense or goalkeeper Zack Steffen.

With 24 minutes on the clock, Steffen was called into action twice in quick succession by Madison and Eric Bird, and both times he denied them to maintain his side’s lead.

Both teams were moving the ball well, especially Maryland who were keeping up the pressure on their ACC opponents and looking to double their advantage.

However, neither side was able to create any further chances for the remainder of the half, and Maryland looked both comfortable and good value for their 1-0 lead at the break.

The Terrapins started the second half brightly and nearly doubled their advantage early in the period only to see Mullins spoon his shot over the bar.

Virginia then found an immediate response, however, as they went up the other end and saw a shot from Madison deflected off Steffen and hit the post before going out.

The Cavaliers were beginning to grow in confidence, but their opponents matched their raised levels of intensity and managed to largely neutralized their threat.

After 64 minutes, Virginia had another superb chance as Madison jinked through several defenders but saw his shot deflected onto the post by Steffen from an acute angle.

As the game entered the final 15 minutes, Maryland extinguished any threat at all as Tsubasa Endoh’s lobbed pass was taken down by Mullins, who slotted it home for his second and doubled his side’s advantage.

Almost immediately, Virginia then earned a penalty as Dan Metzger took out Marcus Salandy-Defour in the box to concede a spot-kick for the Terrapins.

Wharton then stepped up and sent Steffen the wrong way to cut the Cavaliers’ deficit to 2-1 with just 13 minutes remaining.

Then, with just three minutes remaining Steffen saved his team again as he tipped Brian James’ shot round the post at full stretch to keep his team ahead.

Maryland’s hearts were in their mouths for the final moments as Virginia had a corner, but they repelled their final chance, securing the Terrapins’ berth in the College Cup final.

Chris Teale is a contributing writer for College Soccer News.  He is reporting from the College Cup at PPL Park in Chester, Pa. You can reach him at Chris.teale55@gmail.com or follow him on Twitter @chris_teale