Clemson and Stanford Survive And Advance To 2015 National Championship Contest 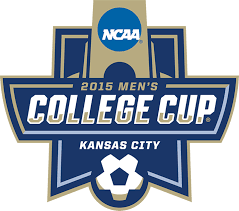 Two scoreless games at the end of 110 minutes of play that required penalty kicks to determine who advanced. Let's say this up-front.  All four teams in the Final Four were in it to win it. Clearly all were aware that they had to play solid team defense to advance but in both semi-final contests the teams attacked. As both contests progressed it became pretty clear that a single goal would likely win it but nonetheless all continued to attack. With the offensvie firepower that all of the Final Four contestants possessed (they entered the contest having scored a total of 191 goals this year) who would have thought that both games would be scoreless at the end of 110 minutes of play and be decided by a penalty kick shootout.

A penalty kick shootot is a difficult, and yes somewhat cruel, way to determine who advances particularly with all that was at stake but the bottom line is that at some point there has to be a way to determine a winner and everyone knows going in that there is a chance that it will come down to penatly kicks.

All four teams like to attack, all deserved a spot in the College Cup (Final Four). A matter of inches or the bounce of a ball can and did make a difference in these contests.  All teams played smart but no team packed the back seeking to settle for a tie. Given the option up front to just settle it via a penalty kick shootout, and forgo regulation and overtime, not a single one of the four coaches or the players would have been willing to have done that.

The point being that all four contestants arrived in Kansas City believing they had the talent, experience, and drive to prevail. In the end it could have gone either way but on Friday night it went the way of the Tigers and the Cardinal. Frankly all four teams will leave Kansas City knowing they have had great seasons and believing that they could have won it all.

However, the two teams left standing – Clemson and Stanford – are clearly worthy to be on center stage on Sunday in the biggest contest of the season in college soccer.

Having said all that, when it was all said and done defense ruled the day in the semifinal contests as often in the case in the one and done, survive and advance, don't take foolish risks environment of the NCAA Tournament.

Clemson out of the Atlantic Coast Conference and Stanford out of the Pac-12 Conference will tangle at 2 p.m. ET on Sunday, December 13 to determine who will be the 2015 National Champion. Both teams are hungry for a national championship and you can count of both teams giving it their all. Despite the potential for tired legs, neither Clemson's Mike Noonan or Stanford's Jeremy Gunn will have a problem getting their respective teams fired up for this one.

The contest, which will be televised live by ESPNU, will take place at an outstading Sporting Park venue in Kansas City, Kansas. Players on both teams came to their respective schools with the idea of playing for and winning a National Championshp and leaving behind the legacy of being the best.

You could play this one in the parking lot outside the stadium and neither side would care.

Syracuse which was ranked as the number eight team in the country in the final College Soccer News regular season endng poll and was the number six seeded team in the NCAA Tournament had a 15-5 advantage in shots and a 10-6 advantage in corner kicks in the match with Clemson,  The Orange conclude a brilliant season in which they advanced to the College Cup for the first time in the history of the program with a 16-5-4 overall record.

Syracuse freshman goalkeeper Hendrik Hilpert who had three saves in goal and the Orange backline of junior Louis Cross and freshmen Kamal Miller and Miles Robinson did an excellent job of containing the Clemson attack.

Junior Andrew Tarbell had a season best eight saves in goal for Clemson and recorded his ninth shoutout of the 2015 campaign. Tarbell also had a key save in the penalty kick shootout. Credit a bend but don't break Clemson backline of senior Kyle Fisher, junior Aaron Jones, freshman Patrick Bunk-Anderson and junior Inman Mafi with a solid performance.

Mafi, Michael Melvin, Thales Moreno, and T.J. Casner converted their penalty kicks to give the Tigers the edge they needed to advance.

Clemson head coach Mike Noonan stated, "The game of soccer is cruel sometimes. We are happy that we advanced, but you have to give a lot of credit to Syracuse. They played exceptionally well. They made it difficult for us." Noonan added, "We've talked about three things through the course of the year. We talked about being ruthless, being relentless, and being resilient. We were certainly resilient today. Noonan added in reference to the success the soccer program and the men's footbal program are enjoying this year, "It's a great time to be a (Clemson) Tiger."

Syracuse head coach Ian McIntyre stated, "I think we're a pretty good team and I think we've had a wonderful season. I couldn't be more proud of my guys. So I want to thank them, I want to thank my staff. We've been grinding for four months. Thank you to all of the families – that's my players' families too. Finally thank you to the whole Syracuse staff that has been here for this whole stretch."

Stanford goalkeeper Andrew Epstein had two saves during regular play and two keys saves in the penalty kick shootout to give the Cardinal the edge they needed to prevail.  The Stanford backline of Brandon Vincent, Tomas Hilliard-Acre, Brian Nana-Sinkam and Drew Skundrich did the things they needed to do to halt an Akron attack that is as explosive and multi-dimensional as any in the country.

Vincent, Mark Verson, Jordan Morris, Eric Verson, Adam Mosharrafa, Brian Nana-Sinkam, Sam Werner and Corey Baird converted their penalty kicks for Stanford in the shootout.  Stanford improves to 17-2-3 overall and advances returns to the National Championship contest for the first time since the 2002 season.  The Cardinal will be seeking their first NCAA men's soccer title.

Akron concludes a very productive 2015 season with an 18-3-3 overall record. Jake Fenlason had six saves in goal and recorded his ninth shutout of the year in the contest with Stanford. The Zip backline of Andrew Souders, Danilo Radjen, Nate Shultz and Brad Ruhaak were impressive in halting a very good Cardinal attack.  Akron will lose the services of seniors Sean Sepe, Fenlason, and Souders due to graduation but should return a very solid contingent of experienced players next year.

Stanford head coach Jeremy Gunn stated, "Tremendous game. Heart felt for Akron. It was an unbelieveable hard fought game. It could have gone either way. So proud of the team the way we fought through and kept our nerve." Gunn also stated, "We always want to attack. If you look at the way we play, we definitely want to look forward. Nobody want to go to penalties. We prepare for it, and we work for it, and we work hard at it, but at the same time, we're looking for that winning goal."

Akron head coach Jared Embick stated, "We started slow the first half and we couldn't break Stanford's pressure. We stated to get better in the second half and overtime. We couldn't create enough good changes, and I think Stanford created better chances than us the whole game. We needed to create more opportunities. It goes to PKs, and anything can happen, and it didn't go our way."

The National Championship Contest – What to Expect

Question:  Can Clemson contain a Stanford attack that when in gear can score in multiples. This is a team that can explode quickly in transition. Jordan Morris (11g, 3a) is the main man in the Cardinal attack but by no means the only weapon they have in their arsenal. Corey Baird (3g, 11a), Foster Langsdorf (7g, 2a), Eric Verson (1g, 12a) and back Brandon Vincent (5g, 2a) are very capable of finding the back of the net. Clearly Stanford has as much pure talent as any team in the country.

Question: Can Stanford hold their own for a full ninty minutes of play (maybe more) with a talented senior driven Clemson team that at times seems to simply will their way to win. This is a team with a ton of grit. Senior forwards TJ Casner (10g, 4a) and Kyle Murphy (8g, 4a), senior midfielder Paul Clowes who sets the pace for the team, and senior back Kyle Fisher look to be on a mission. Don't forget this is a Clemson team that has produced a total of 52 goals this year. The Tigers can play a little offensvie soccer themselves.

Stamina will be a factor. Both teams are coming off a physically and mentally demanding 110 ten minutes of play with only a singe day of rest. This will likely have an impact as the game progresses. It is highly likely that this one will not be scoreless. Mental toughness not to mention physical toughness will be a factor. It is one thing to be tired and have a lead and another thing to be tired and have to play catchup. That means whoever scores first will have the opportunity to open the game up.

Both teams will attack and both will seek to put pressure on their opponent.

This is not the time of the year for either team to try to reinvent what they do well. The team that settles into a rhythm early and plays their game will prevail. Emotion is good but not at the expensive of doing the things that a team needs to do well to prevail.

Productivity out of set pieces and avoiding defensive lapses in terms of transition play will be important. That includes the ability to open the field of play by attacking at speed down the side and switching the point of attack to give the playmakers on both teams the opporunity to take defenders on.