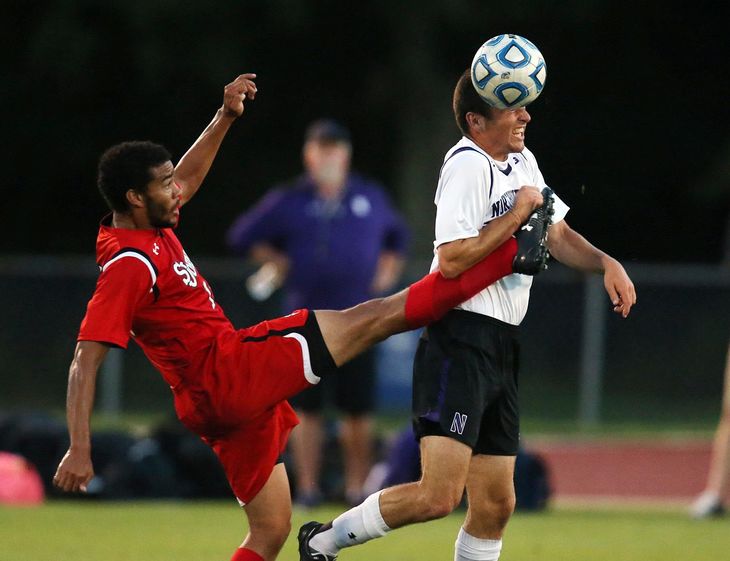 The recent 2015 MLS Superdraft provided the opportunity for some of the top talent in the nation to have the opportunity to succeed in the MLS. For many this opportunity is a dream come true.  With that said every year some very talented players slip through the cracks perhaps exposing the lack of scouting of some MLS clubs. However, regardless of the amount of research conducted prior to the draft, history has established that in all sports some very capable players are often overlooked. There are plenty of examples of talented college soccer players such as Jonathan Bornstein and Omar Cummings that were not selected in the first two rounds of the MLS draft yet still had successful professional careers.

The next hopeful on that list of players could be Casey Osborne, a center back from St. John’s University and our latest College Soccer News Player Profile. For many student-athletes the most bittersweet moment as a college player is their team’s senior night, the final amateur sporting event of their career.  The game is supposed to be a celebration of sorts, honoring each team’s graduating seniors, but for some it’s the last competitive game they’ll ever play. For St. John’s University center back Casey Osborne like some other college seniors, that game likely signified among other things the opportuity to transition to bigger things.

While in the locker room as St. John's prepared for its final Big East game of the 2014 season which was against Seton Hall, there was a feeling of anxiety among the squad, especially the seniors. Scanning the locker room prior to the game, everyone was doing their own pregame ritual, with one consistent theme; senior Casey Osborne was smiling, and getting the whole team ready for their last test of the year. A natural leader, Osborne, is a vocal player on and off the pitch.

When asked to describe himself in one word as a person off the field, the first thing to come to mind for the NSCAA 2012 Junior College National Player of the Year, was, “goofy”.  Osborne, while a character off the pitch is anything but that once he steps on the field. “Nobody outworks him” was a frequent response from his fellow St. John’s teammates regarding Osborne’s on field work ethic.  The hard work paid off as Osborne formed arguably one of the best defensive duos in college soccer alongside roommate and recent MLS draftee Tim Parker. That partnership has been the keystone to the St. John’s team over the past two seasons.

Like every success story, there were set backs along the way.  For Osborne this moment came his junior year at St. John’s in a game against Villanova.  The aggressive defender tore his ACL, a setback that would have caused many to sit back and sulk.  But that was not the case with the optimistic Osborne took the injury as an opportunity to learn from the game and come back even stronger.  Osborne stated, “It’s painful to relive the injury, but it helped me mature as a player.” Without a doubt, the injury had an affect on the team, but they rallied behind their leader, competing how they knew Osborne would.

The rest of his junior year, Osborne was the team’s biggest cheerleader, urging the team onto their third consecutive NCAA tournament bid. While sidelined, “Big Cat” as his teammates call him, took advantage of the opportunity to expand his knowledge of the game.  The best way to do that is as Osborne reiterated, “learning from the best… I took every moment I could analyzing the game and listening to Coach Masur.”

The 2012 Junior College First Team All-American at Tyler Junior College applied the knowledge he gained to the field for his senior year at St. John's and it showed. Osborne returned healthy playing the second most minutes out of all the field players on the team, while enjoying his game.  He was adamant claiming, “I’ve always said the day I stop loving the game, is the day I stop playing.”  This joy along with his competitive drive led to Osborne playing his best ball as the season progressed.

One of the team’s biggest tests of the year came playing against perennial powerhouse, UCONN Huskies.  St. John's entered that contest without First Team All Big East selection, Tim Parker, and Osborne knew he had to step up.  What made this task even more daunting was the fact that UCONN had arguably the best forward in the country in Cyle Larin, the number one pick in this year’s MLS Superdraft. Knowing Larin would be difficult to contain, Osborne took it upon himself to do just that. The game showcased Osborne’s best skills as he shut down the Canadian national teamer, not allowing him one good chance at goal.  The most impressive part was that at times Larin couldn’t even get a touch on the ball. Osborne was reading the game; intercepting clear-cut chances and winning nearly every header, one of his best attributes.  St. John’s went on to win the game, led by Osborne’s defensive performance.  Results like that indicate that Osborne has what it takes to play at the next level.

Sitting down with “Big Cat” is a surreal experience since you expect a player with all emotion and energy that he displays on the field to be a loud fiery guy figure, but he’s anything but that.  ‘Humble’ is the only word to describe the small town kid from Georgia. Osborne is the type of player who appreciates the opportuities he has had to play the game and gives credit where credit is due to those who have helped him along the way. He stated, “Starting off playing at Tyler Junior College instilled a great work ethic in myself. Every practice, every game was a chance to beat someone out. I looked forward to it”  This is part of the reason whyTyler JC won a national championship with Osborne, before the center back made the move to St. John’s University.

Watching St. John’s warm up prior to their senior night game doing a crossing and finishing drill, there was one odd occurrence, Osborne scored the most goals for the team.  When asked how he got this knack for scoring goals, he smiled and said, “I used to play forward a bit at Tyler. It helped a lot with my footwork and understanding how to get away from defenders.  Now on the other side playing defense, I can read the forwards and their movements better”.

Despite playing defense during the rest of his career Osborne scored a couple important goals for the Johnnies in the past two seasons and credits his short stint at forward as the reason why. With the 2014 college season now over and the MLS season coming quickly, Osborne is looking to make a team’s roster and prove his worth.  “I feel like I deserve it; I have the hunger, I belong on your team.”

For a league that puts much of their focus on athleticism and work rate, a team could do much worse than taking a risk on Osborne.  He’s a strong, athletic center back who’s absolutely dominant in the air, a trait many coaches look for. After talking to Osborne about his future, he said, “hopefully in 5 years I’m still playing, it would be a dream; I love the game and wouldn’t want to do anything else.”

With the 2015 MLS Supplementary draft just around the corner its likely that Osborne will still be provided the opportunity for his dream to come true.

Ben Roth is a contributing writer for College Soccer News.  He can be reached at ben.roth@pda16@gmail.com