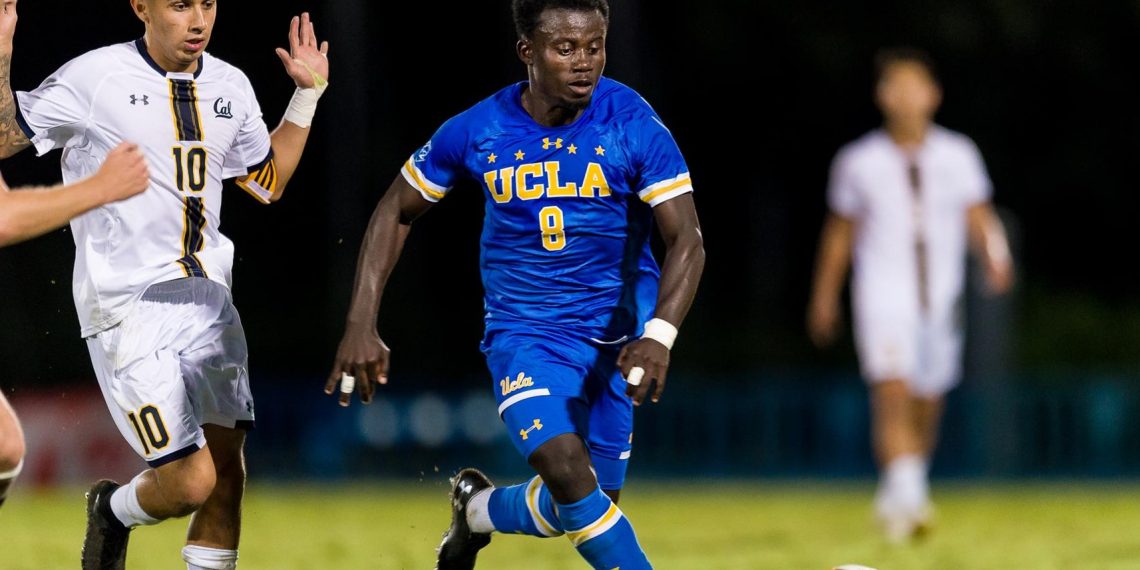 Anderson Asiedu, who has the ability to run box to box for ninety minutes, is one of the best all-around midfielders in college soccer. The senior UCLA midfielder, a two-time Hermann Trophy watch list player, is eager to finish his final season in LA with a bang.

It all began for Anderson in his hometown of Dormaa Ahenkro in Ghana where a work ethic that matched his abilities on the pitch resulted in a move to the United States and Saint Benedict’s Prep that changed his life forever.  He then played two very productive seasons at Monmouth University under coach Rob McCourt before taking his talents to LA.

Asiedu has evolved a lot over his college career.  From an energetic and exuberant right midfielder, to a passionate and hard as steel box to box midfielder at Monmouth University, to a composed holding midfielder at UCLA where he sets the tempo of the game with clever passing and decisive runs into the box.

What has never changed, is his commitment to the cause, and his ability on the ball. The way he can get hold of a ball to spray sixty-yard diagonal passes, whip in early crosses, or simply drill a crisp pass in to feet is fantastic.  With injuries limiting his box to box capabilities, he has shown great adaptability to reinvent himself as a player under the coaching of Jorge Salcedo.

Asiedu is also very good at pressing opposition players into making mistakes. He charges players down, spreading himself to look as big as possible considering he is only 5’ 6” which often causes players to panic and either play a loose pass or simply stand still.  Asiedu is very capable of laying a solid tackle on the opposition when someone runs at him.

But his real strength, and what makes him so crucial to UCLA, is game management.  If the game is getting away, Asiedu has the ability to slow the tempo down by taking a few touches or by shifting the ball back to the defense. If the game is too slow and compact, he will play fast and utilize short one touch passes to move the opposition around in order to open up space.

All in all, Asiedu is an effective holding midfield player. He is very intelligent, passes the ball superbly, works hard defensively, and doesn't often over commit himself.

If Asiedu continues to stay fit, he will play a crucial role in the Bruins effort to return to the College Cup in 2018.  Asiedu and his Bruin teammates looked sharp in an impressive season opening 4-0 win on the road against a very good Coastal Carolina team.