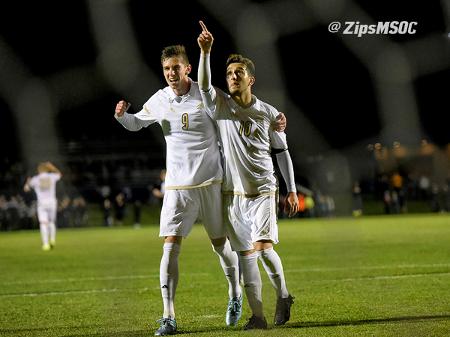 There was a collective sigh of relief amongst the Akron faithful when midfielder Adam Najem (10g, 11a) announced he would be returning for his senior year.  The College Soccer News 1st Team All American could have turned pro this offseason, but opted to return to the place he’s called home for the past 3 years.

“Akron’s done so much for me,” said Najem. “I feel like there’s things left unfinished. We want to win a national championship for the best fan base in the country”

The Zips were in grasp of their coveted 2nd national championship last season as the MAC Conference Champs reached their first College Cup since 2010.  The Zips fell short in penalty kicks to eventual national champs Stanford, in a game they could have won.

“The final four was a heartbreaker. It just didn’t sit well with me,” said Najem.

While it was a bitter ending to an impressive season, the Zips have turned the page to the upcoming season in which they face the likes of Georgetown, UCLA, and UC Santa Barbara.  The AK Rowdies are hopeful the rejuvenated squad can reach their 2nd consecutive College Cup.  Akron will be one of the likely favorites to win the title and if they do, it will no doubt be in large part due to Najem, who led the team with 31 points in 2015.

The always modest Adam Najem is focused on the upcoming season at hand, but it’s hard to ignore the Clifton, New Jersey native’s game changing talent.

In a sport like college soccer that at times lacks technical and tactical proficiency, it’s a breathe of fresh air to see a player of Najem’s quality making his mark at this level.  It helps that the crafty midfielder plays in the perfect system to highlight his playmaking qualities.

It’s the possession based attacking minded system Caleb Porter implemented upon arrival in Akron and that current coach Jared Embick, now entering his 5th year at the realm, has improved on.

“Jared has had an amazing impact on my playing already.  It’s the way he sees the game and how he’s changed the way I see the game; in film sessions, and just talking to him.  He’s instilled a great philosophy into the team and has a great soccer mind.  I wouldn’t want to play for any other college coach in the country.”

It’s obvious Najem is very complimentary of Embick and rightfully so.  The New York Red Bulls academy product has always been one of the most promising prospects America has to offer, but his game has matured tremendously since his arrival in Ohio.  The natural #10 has become much more cognizant tactically on when and where to attack and you can tell his willingness to work on both sides of the ball has improved.  He’s more determined offensively and defensively to make a difference and is almost always the catalyst to the Zips dynamic attack.

These improvements to Najem’s game are what makes him arguably the best player in college soccer entering the 2016 campaign and a Hermann Trophy award favorite.

Despite all the hype, Najem has remained grounded, “It’s nice to even be mentioned, but I’m not here for individual awards.  I didn’t go to college for individual recognition.  I want a national championship,” stated Najem.

Part of the process of becoming a more well-rounded player and helping the Zips win the title happened this spring when Najem trained with Deportivo La Coruña.  It was a chance to challenge himself and see how the European game is in comparison to here in the States.

“It went really well and there was a great overall atmosphere.  The guys fight for their lives every training session, competing day in and day out” said Najem.“That’s what I took from Europe.  Always try to improve yourself every day.”

This season all eyes will be on Najem, including those of MLS Executives and clubs abroad.  Next year, Najem will join the impressive list of Zips in the Pros that includes, DeAndreYedlin, Darlington Nagbe, Perry Kitchen and many others, but it’s just a question of where he will go.  MLS Homegrown rules are always confusing including to the clubs themselves, but it appears Najem could be eligible for a homegrown contract with the New York Red Bulls, while a move overseas is a possibility as well.  If neither of those options seem tempting enough, Najem looks like a sure fire number one draft pick for the 2017 MLS Draft.  Regardless of all the speculation, the former U.S youth national teamer, is concentrated on the current Akron season ahead and will look at his future when the time comes.

“I don’t want to close the door on anyone so I’ll evaluate my options at the end of the season” said Najem. “Hopefully I’m making a big impact wherever I am.”

While the future looks bright for Najem, his focus is 100% on the upcoming season and what he can do to help Akron lift the title.  With the plethora of talent from returning players and the incoming freshmen classalong with one of the top coaches in America leading the way, the Zips look poised to make a run.

Ben Roth is a contributing writer for College Soccer News. He can be reached at ben.rothpda@gmail.com or at Twitter: Benjiroth_16