A Look At The Upcoming Contests For The Top 10 Teams In The College Soccer News Men’s National Poll. 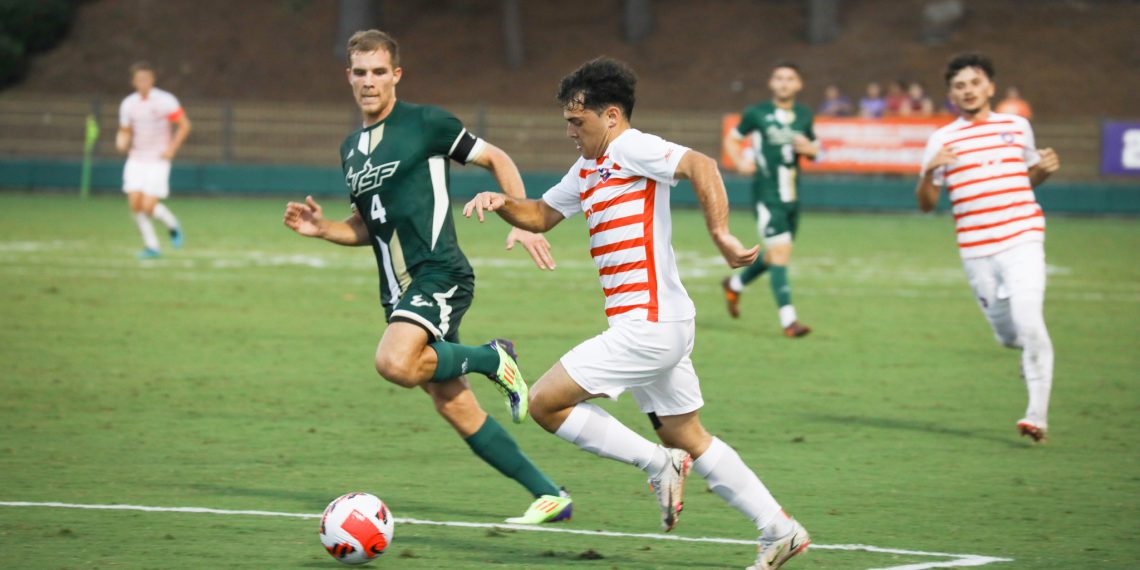 The Action Is Heating Up From Coast To Coast AS Teams Seek To Settle In On Both Sides Of The BAll. The Season Is Still Young But Nonetheless It Is Gut Check Time.

#1 Clemson (4-0-0) – The Tigers take to the road on Friday for the first time this season to open Atlantic Coast Conference play in Raleigh against an improved N.C. State (3-0-1) team. The Wolfpack have a shot at an upset if they can contain a potent Clemson attack. The Tigers have scored a total of 15 times to date while their defense anchored by senior goalkeeper George Marks along with a very experienced backline has only allowed one goal.

#2 Georgetown (4-0-0) -The Hoyas face their toughest test of the young 2021 season on Saturday when they host a Maryland (4-0-0) team that has been doing a good job of finding ways to close out contests. The Hoyas will need to settle into a rhythm on the offensive side of the ball and control the tempo of the match in order to prevail over the Terps.

#3 Indiana (3-1-0) – The Hoosiers travel to face Akron (4-0-0) on Friday at 7 p.m. The Zips are a difficult team to face at FirstEnergy Stadium as reflected in their recent win over a very good Pittsburgh team on Monday. Indiana has lacked punch on the offensive side of the ball in part due to the fact that junior forward Victor Bezerra was not in the lineup in their 1-0 win over Butler and 3-0 loss to Creighton. The contest with Akron will test the talent as well as the mettle of the Hoosiers.

#4 North Carolina (3-0-1) – The Tar Heels open Atlantic Coast Conference play on the road on Friday at 7 p.m. against a dangerous but somewhat unpredictable Pittsburgh (2-2-0) team that has had trouble at times settling into a rhythm on the offensive side of the ball. The Tar Heels have their work cut out for them in this one. A lot will hinge on whether a North Carolina team that has found the back of the net 14 times to date while allowing only one goal can apply pressure on the offensive side of the ball and still keep the Panther attack in check.

#5 Pittsburgh (2-2-0) – The Panthers come into their match with North Carolina (3-0-1) on Friday off a 2-1 loss to Akron on Monday night at FirstEnergy Stadium. Look for Pitt to come out on the front foot and seek to find a gap in a very solid North Carolina defense that they can exploit. Pitt will need to put in two full halves of play in order to prevail. This is a difficult conference opener for both teams.

#6 Marshall (2-1-1) – The Herd travels to face Bowling Green on Saturday at 8 p.m. Marshall has been a little sluggish in the early going but had a very productive 4-1 win over ETSU on Tuesday during which four different players found the back of the net. They are facing a good Bowling Green (3-0-1) team that is coming off an impressive 3-0 win in East Lansing over Michigan State. That win was Bowling Green’s first over Michigan State in 20 years. Marshall should win the battle of possession and the contest but Bowling Green is capable of pulling off the upset if the Herd looks past them.

#7 Washington (3-0-0) – The Huskies will host Dartmouth out of the Ivy League on Friday at 7 p.m. The Huskies have three good games under their belt in which they have looked good on both sides of the ball. This is the season opener for a Dartmouth team that like all Ivy League schools did not participate in the 2020 season. Chances are pretty good the Big Green will be a little rusty plus its not easy to travel cross country to play. It may be close in the early going but as the contest progresses Washington should take control of the match.

#8 Virginia Tech (2-0-2) – The Hokies performed well during phase one of the 2021 season with wins over ranked Marshall and UCF teams and a 3-3 tie on Monday with a ranked Seton Hall squad. The Hokies now begin Atlantic Coast Conference against Duke (3-1-0) on Saturday in Durham. The Hokies have to keep their eye on the prize and continue to play with the grit that has served them well to date. If there is a concern with this team it is a defense that is porous at times as reflected in the fact that they allowed Seton Hall to come from two goals down in the second half to secure the tie. The Hokies continued success is dependent upon finding the right balance and consistency of play on both sides of the ball. This is a young emerging Duke team that won its first three contests before coming out on the short end of a 1-0 contest with Seattle on Monday.

#9 West Virginia (3-0-1) – The Mountaineers will host Ohio State (1-2-1) on Friday at 7 p.m. West Virginia under head coach Dan Stratford has been the surprise team in the early part of the 2021 season with unexpected wins over Pitt 2-1 and Penn State 3-1. They are coming off a scoreless tie with Loyola Maryland during which they were uncharacteristically unable to convert the scoring opportunities that came their way. Ohio State has played well at times so far but have been unable to hold on to early leads and close out contests. Seven different players have netted West Virginia’s seven goals to date. Look for one or more of them to get their second against the Buckeyes.

#10 Wake Forest (2-1-0) – The Demon Deacons travel to open Atlantic Coast Conference play against Louisville (2-2-0) on Friday at 8 p.m. Wake Forest has been a difficult team to get a handle on so far. After an unexpected season opening 2-1 loss to VCU they topped Bucknell 2-0 and Cornell 2-1 in overtime. The Deacons are a talented team but look to be a work in progress at this point on both sides of the ball. A win over the Cardinals would be a good step forward and momentum builder for the Demon Deacon team that has the potential to be very good. Louisville is coming off a 3-1 loss at home to rival Kentucky in a game in which they were unable to sustain an early lead. Look for both teams to apply pressure in the early going and for one to settle in and take control of the match.