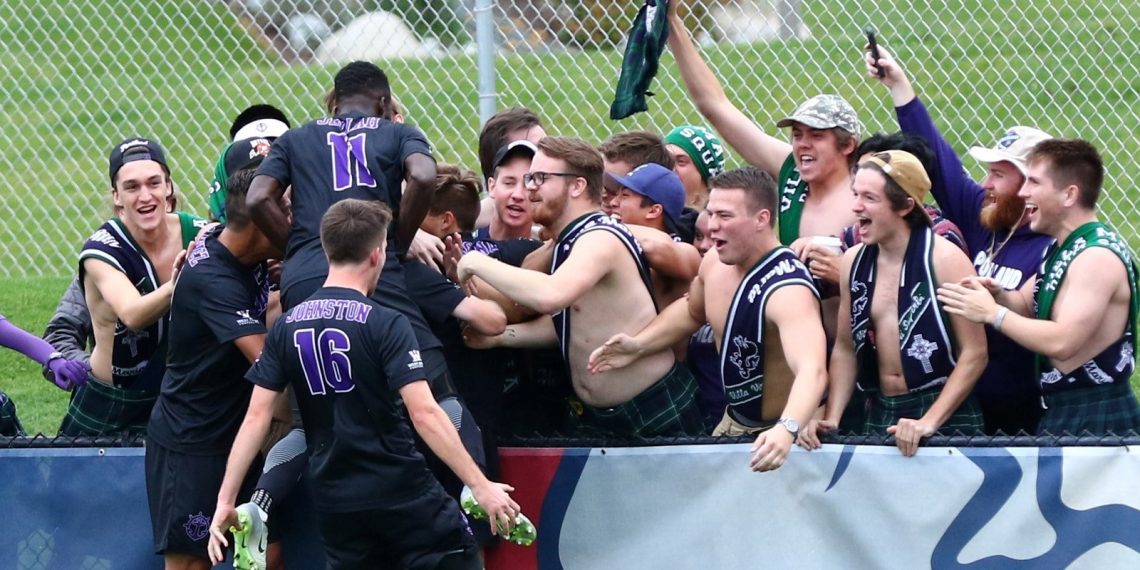 #10 ranked Indiana defeated #3 ranked Louisville 2-1 on the road to halt the Cardinals' eight game winning streak.  Defender Grant Lillard drove home a header in the first half and midfielder Trevor Swartz converted a penalty kick less than a minute into the second stanza to give the Hoosiers the margin they needed to pull off the upset.  It was a very good win for an IU team that was thumped 4-0 last week by Notre Dame on the road.  Louisville was unable to take advantage of the opportunities that came their way on the offensive side of the ball.

Tulsa upset #4 ranked Creighton 2-1 with a come from behind win with Alejandro Chavez and Matthew Puig contributing a goal each in the final five minutes of the contest.  It was an uncharacteristic loss for a Creighton team that seldom relinquishes a lead in that manner. Tulsa's persistent pressure paid off as the Golden Hurricane improve to 6-4-2 overall.

#16 Charlotte topped #6 ranked Clemson 1-0 on the road at Historic Riggs Field which is always a difficult venue for Tiger opponents.  Sophomore forward Daniel Bruce netted the game-winning goal for the 49ers from six yards out after a nice move off the dribble to secure the angle he needed to skillfully place a shot into the back of the frame.  Charlotte has another big road contest  on their dance card when they travel to Blacksburg next Tuesday to tangle with a very good Virginia Tech team.  Clemson on the other hand must quickly rebound as they hit the road to face Boston College in a crucial ACC contest.

#7 Denver gutted out a hard fought 1-0 win over #9 Butler on the road with redshirt junior Blake Elder netting the lone goal of the contest with an assist from defender Reagan Dunk.   Pioneer head coach Jamie Franks stated, "Tonight was our best performance of the year, and I'm proud of the group, and the leadership shown in the middle of the park from Sam Hamiliton and Graham Smith tonight."   Denver continues to play solid team defense and has been able to come up with the big play needed on the offensive side of the ball to prevail in the close contests .  The Pioneers are now 11-0-2 overall.  Butler will seek to get back in the win column after back-to-back 1-0 losses when they travel to face St. John's on Saturday in a Big East Conference match.

#14 Michigan State continues to impress with a 2-0 win over #17 Akron in the friendly confines of DeMartin Soccer Field in East Lansing.  Sophomore forwards Ryan Sierakowski and Hunter Barone contributed the two goals for Michigan State.  The Spartans have nine wins to date which is one more than they secured during the entire 2015 campaign.  When asked about the success his team is having this year Michigan State head coach Damon Rensing stated, "I think it is part of the maturation process. It is a lot of the same players. We played a lot of good games last year, we just didn't find ways to win those games."  The Spartans travel to University Park to face Penn State on Saturday in a Big Ten contest that belongs on the upset special list.

Maryland topped West Virginia 1-0 in Morgantown on Monday night to improve to 10-0-2. The Terps have displayed a multi-dimensional attack led by sophomore forward Gordon Wild who has found the back on the net a total of ten times so far including four game-winners. Jake Rozhansky, Amar Sejdic, Sebastian Elney and Eryk Williamson are also dangerous finishers.  The positive impact that midfielder Rozhansky is having on the Maryland attack should not be underestimated.  He has been at the heart of the attack serving as the team quarterback and playmaker.  Maryland will host a vastly improved Wisconsin team that will arrive in College Park with momentum of their own.  Look for John Trask to have his team prepared to play.  The Badger defense has been very solid to date holding opponents to a total of only seven goals.  In order for Wisconsin to have a shot at pulling off the upset, they will have to play their best soccer of the year for a full ninety on both sides of the ball.  Look for the Terps to come out strong and continue to press throughout the contest.

This weekend is gut check time in the ACC with several contests on tap that have huge conference as well as national implications.

#1 Notre Dame travels to Charlottesville to square off with #25 Virginia on Friday night – Forward Jon Gallagher (11g, 5a) and back Brandon Aubrey (8g, 1a) have been the top goals scorers for the Irish.  Contain them, no easy task, and the Cavaliers have a good chance of pulling off the upset.  Let them get in gear and the Irish will come out on top.

#3 Louisville travels to Winston-Salem to tangle with #11 Wake Forest – The Demon Deacons come into this one with a 1-0 loss on the road to Clemson and 2-2 tie on the road against Notre Dame in their last two ACC contests.  They need to hold serve at home against Louisville.  The Cardinals on the other hand come into this one seeking to get back on track after being upset at home by Indiana.  It is trite but true, the team that is able to finish the scoring opportunities that come their way will prevail in this one which is likely to be decided by a one goal margin.  Demon Deacon head coach Bobby Muuss hit the 100 career win mark last week.

North Carolina takes on Duke in Durham on Friday night – It is a rivalry game no matter what sport is at issue. The Tar Heels have the stronger team but this one is Duke and UNC so it is up for grabs.

Virginia Tech squares off with Syracuse at the SU Soccer Stadium.  Syracuse is 0-3-1 in their last four outings.  They lost to Notre Dame and Louisville on the road, tied UNC at home in ACC matches and lost on the road 2-1 to Albany in a non-conference contest.  The Orange need a win to halt their downward spiral.  Virginia Tech is having a banner season however they come into this one off a disappointing 1-1 tie with Wright State in non-conference play.  The Hokies are good but they will be hard pressed to hang with Syracuse on the road.  Junior forward Marcelo Acuna  (9g. 1a) continues to be the main man in the Virginia Tech attack.

Portland under the direction of first year head coach Nick Carlin-Voigt  has won three straight including an impressive 5-1 win on the road over Gonzaga in their first West Coast Conference contest of the 2016 campaign.  Senior midfielder Eddie Sanchez (6g, 2a) contributed a hat trick in that contest.  The Pilots are now 7-3-1 overall.  Carlin-Voigt stated, "We really focused on some key areas of our game over the past fourteen days in training that came to life today."   The Pilots now take to the road again to face San Francisco and Santa Clara in conference play.  Those games this weekend should give Carlin-Voigt a good indication of just how far his team has progressed.

UMass Lowell out of the America East Conference continues to roll. The River Hawks topped Vermont 2-1 on Wednesday night to improve to 9-0-2 with a 2-0-2 mark in conference play.  Ivan Abramovic (6g, 7a) and Wuilto Fernandes (8g, 2a) have combined to score fourteen of the twenty-one goals the River Hawks have placed in the back of the net thus far.  After an impressive start, Vermont has lost three out of their last four to drop 9-4-1 overall with a 1-2-0 mark in America East Conference action.  UMass Lowell has a tough one coming up Sunday when they travel to place a pesky Stony Brook team that comes into the contest off a 2-0 win over New Hampshire and a 3-1 victory over Hartford.  Place the River Hawk vs. Seawolves contest on the potential upset list.

The Pac-12 race really is beginning to heat up.  UCLA will travel to face California on Thursday night in a contest that is almost always hotly contested followed by a match with Stanford on the road on Sunday. Stanford has opened Pac-12 play with wins over California, Washington, and Oregon State. The Cardinal will host San Diego State on Thursday followed by the showdown with nemesis UCLA on Sunday.  Wins at home in Pac-12 play are essential while wins on the road are icing on the cake.

John Scott's Hartwick squad out of the Sun Belt Conference has now won five straight and is unbeaten in their last eight contests to stand at 7-1-2 overall.  The Hawks cleared a potential hurdle last Saturday when they topped an always difficult Coastal Carolina team 1-0 in their season opening conference game.  The Wick has displayed a balanced attack with eleven different players so far contributing a combined total of twenty goals to date with a solid effort on the defensive side of the ball that has held opponents to a total of only eight goals to date.

Bowling Green survied a 2-1 scare on the road at Northern Kenucky last Tuesday and then opened MAC play last Friday with a solid 1-0 win over West Virginia to improve to 8-3-1 overall.  Junior defender Alexis Souahy was named to the College Soccer News National Team of the Week last week after scoring both goals in the BPSU win over Northern Kentucky and being part of very tenacious Falcon defense that shutout West Virginia. Senior forward Pat Flynn netted the game-winner in the victory over the Mountaineers.  Bowling Green will seek to improve their standing in the MAC when they host a good Western Michigan team that is led on the offensive side of the ball by junior midfielder Brandon Bye.

Denver and Loyola Chicago became the first two teams in the country last week to reach the ten win mark this season. Others will no doubt reach ten wins this week.