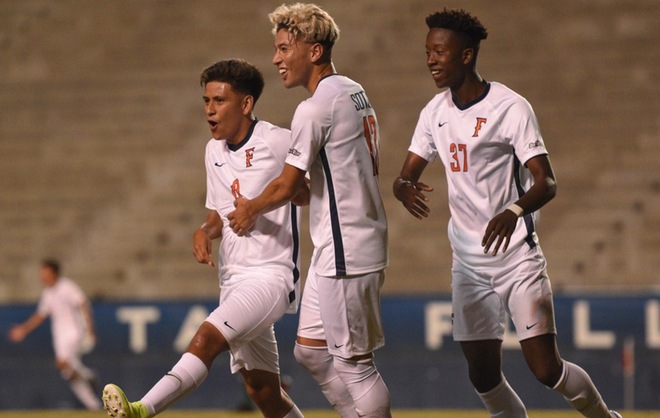 These teams are off and running with an impressive start to the 2019 campaign  Time will tell whether or not they will be able to sustain the success they have enjoyed so far as the grind of the season progresses.

Cal State Fullerton – The Titans are 4-0-0 and off to their best start since the 2000 season with a balanced attack led by junior forward Christian Pinzon and redshirt midfielder Oscar Flores and a defense anchored by veteran senior netminder Paul Andre Guerin that has allowed only two goals to date while securing wins over Hartford, Bryant, Loyola Chicago, and Utah Valley.

Up Next: The Titans host an Air Force team on Friday that has scored only one goal in three contests to date and a Florida Gulf Coast University squad that has an explosive offense that when in gear can score in multiples.

Mercer – The Bears out of the Southern Conference are 4-0-0 with wins over Cincinnati, Presbyterian, UAB and Memphis.  Mercer is led on the offensive side of the ball by sophomore forward Trevor Martineau (3g, 3a), the reigning SoCon Player of the Year, and their defense is very capably anchored by redshirt junior goalkeeper JR DeRose.

FIU – The Panthers are 3-0-1 with a 5-1 win over St. Bonaventure, a signature 3-1 victory over James Madison, a 3-3 tie on the road with Jacksonville in which they scored two goals in the final five minutes of regulation, and a 2-1 win over Seton Hall.  Freshman midfielder Stephen Afrifa (3g, 0a) has added an additional dimension to an FIU attack that has produced a total of thirteen goals to date. This is a good FIU team but consistency of play remains an unanswered question.

Up Next: FIU begins CUSA play when they travel to Boca Raton on Saturday to face an FAU team that is 2-1-0 with wins over James Madison and Jacksonville.

Bowling Green – The Falcons are coming off of a 1-0 win over Wisconsin and a 3-0 win over Northwestern after opening the season with a 1-1 tie with Duquesne and a 2-0 victory on the road over Robert Morris.  Senior team captain Anthony Mwembia anchors a BGSU defense that has allowed only one goal in four games to date. Senior Chris Brennan (1g, 2a) and junior Chris Sullivan (2g, 2a) are among those who add punch to the Falcon attack. Last year Bowling Green began the season with a 1-5-2 record and then rebounded. This year they are taking care of business in the early going with an impressive start.

Up Next:  Bowling Green under Eric Nichols will seek to build on their 3-0-1 record and top another Big Ten team when they welcome Ohio State to Cochrane Stadium on Friday night.  Ohio State under Brian Maisonneuve comes into the contest with a 3-1-0 record and momentum of their own with wins over UIC, Dayton and EIU after beginning the year with a 4-3 loss to CSUN.  This one should be a great college soccer match with a lot on the line for both teams.

San Diego – The Toreros out of the West Coast Conference under the guidance of second year head coach Brian Quinn are off to a 4-0-0 record and their best start since the 2009 season.  San Diego has not allowed a goal in their last three contests recording a 3-0 win over Cal Poly, a 1-0 victory over Detroit Mercy and a 3-0 win over Belmont after opening the 2019 season with a 3-2 win over San Diego State out of the Pac-12.  Senior Miguel Berry (4g, 3a) powers the Torero offense while redshirt sophomore goalkeeper Matt Wiher has been at the heart of a very stout San Diego defense.

Up Next: The Toreros host a UC Davis team on Friday that also belongs on the short list of teams off to a good start.  The Aggies boast a solid 3-0-1 record that includes a season opening 2-0 win on the road over a good Wisconsin team, a scoreless tie on the road with Milwaukee, and wins at home over CSU Bakersfield 2-1 and Air Force 2-0. This is a very balanced UC Davis squad with six different players accounting for their six goals to date and a defense led by senior netminder Willis Lapsley that has allowed only one goal. The winner of this one gains momentum and credibility.

Navy – The Midshipmen out of the Patriot League are off to their best start since the 2010 campaign with wins over UNC Ashville 3-1, George Mason 1-0, St. Bonaventure 1-0 and Saint Peter’s 2-0. Navy has been tenacious on the defensive side of the ball posting three consecutive shutouts.  Junior goalkeeper Ian Bramblett has been solid in goal making the key saves that he needs to make to give his team the opportunity to secure wins. Sophomore defender Matt Nocita and sophomore forward Jacob William have two goals apiece to date.

Up Next: Navy travels to face a Mount St. Mary’s team out of the Northeast Conference on Saturday night that has also started well with a perfect 3-0-0 record that includes wins over Winthrop, Bucknell and Howard.

NJIT – Redshirt junior forward Rene White (4g, 1a) is among those who provide firepower to an NJIT squad out of the ASUN Conference that is 2-0-1 and undefeated through the first three contests of the year for the fourth consecutive season. The Highlanders have a 7-0 win over Sacred Heart, a 2-2 tie with Fordham, and a 1-0 signature win over VCU to date.

Up Next: NJIT will seek to add to their win total when host Drexel on Wednesday and travel to face Radford on Saturday.

Up Next: Villanova will put its 4-0-0 record on the line when it travels to face Penn State on Friday. Penn State is 2-1-1.

Boston College – The Eagles are off to a perfect 4-0-0 record with wins over Quinnipiac 2-0, Boston University 1-0, Rhode Island 2-1, and Holy Cross 3-2. Boston College has displayed a balanced attack to date with seven different players contributing a goal. Amos Shapiro-Thompson (2g, 0a) and Stefan Sigurdarson (1g, 2a) are among several members of the freshman class who have been in the starting lineup and have performed well.

Up Next:  The Eagles travel to Raleigh on Saturday to face NC State in a contest in which their freshmen will be introduced to the rigors of ACC play.

Rutgers – The Scarlet Knights are off to their best start since the 1996 campaign with a 4-0-0 record that includes wins over Temple 1-0, Drexel 2-1, Elon 1-0 and Binghamton 3-2.  Forward Jackson Temple and midfielder Jorgen Wisth Lie have played key roles in the attack to date. Freshman Oren Asher has been solid in goal.  Consistency of play and the ability to put together a full ninety minutes of soccer look to be among the factors that will impact Rutgers’ success as the season progresses.

Up Next: The Scarlet Knights will seek to keep the momentum alive when they welcome Manhattan to Yurcak Field on Saturday.

St. John’s – St. John’s has opened the season with four consecutive wins for the first time in eighteen years. The Johnnies shut out Appalachian State 2-0 and NC State 1-0 on the road and then topped Manhattan 3-0 and Iona 3-2 at home.  Seven different players have scored in the four wins to date. The Johnnies streak of 326 minutes without allowing a goal was halted in their win over Iona.

Up Next:  St. John’s hosts Penn on Friday.

Missouri State – Josh Dolling has contributed three straight game-winning goals for the Bears who are 3-0-0 with a 1-0 win over Santa Clara, a 3-0 win on the road against Kansas City, and a 1-0 win at home over Central Arkansas in which Dolling netted the lone goal of the match in the eighty-ninth minute. The Bears' defense anchored by defensive midfielder Jack Denton and goalkeeper Michael Creek among others has been outstanding.

Up Next: Missouri State will host Tulsa on Saturday.