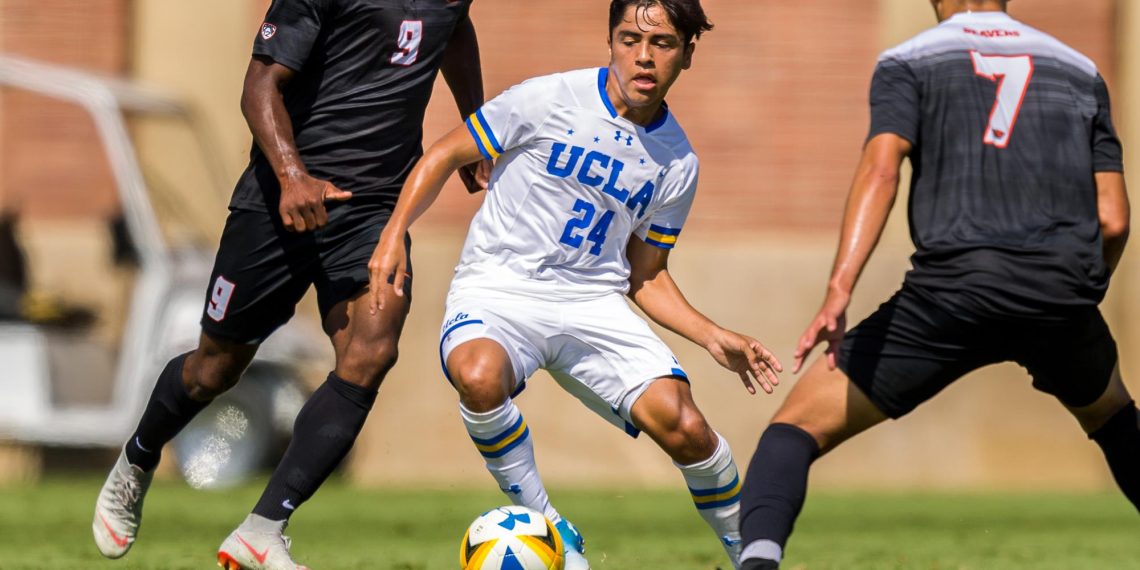 Draft season is upon us! With College Cup and MLS Cup having both concluded, it’s officially time to start thinking about the MLS SuperDraft.

The top prospects will convene in Orlando for the MLS Combine, January 3-9, leading up to the MLS SuperDraft on Jan 11. The initial list of seniors for the MLS Combine has been released, with the group of Generation Adidas signings (underclassmen), yet to be announced by MLS. Subject to change with GA and Homegrown signings pending, here is the first ​College Soccer News projection of the selections.

1.​Frankie Amaya​**(UCLA) – If the U.S U-20 midfielder is offered a GA, he’ll be arguably the top attacking prospect in this draft. For an MLS team, that wants a young playmaker to develop, Amaya is the pick.

2. ​Andre Shinyashiki​ (Denver) – The nation’s leader scorer with twenty-eight goals, Shinyashiki, is as an intriguing of a prospect as there is in this draft. The MAC Hermann Trophy finalist, is a playmaking forward, who can create goal scoring chances on his own. There are questions as to what position Shinyashiki projects to in MLS, but regardless expect him to be one of the top players taken off the board.

3. ​Tajon Buchanan​** (Syracuse) – The Canadian born winger is a pacey playmaker with the intangibles to succeed in this league. Buchanan has a high upside and will likely be a top pick if offered a GA deal.

4. ​Mo Kamara​** (UCLA) – Kamara, a potential GA prospect, is a raw forward with loads of upside. He was plagued with injuries in his first year with the Bruins, but has shown scouts enough to be in consideration for a top 5 pick.

5. ​Siad Haji​** (VCU) – Haji, the U.S youth international has been on MLS radars for a while now and with a solid combine, will be one of the first midfielders taken in the draft.

6. ​John Nelson​** (North Carolina) – For a league that lacks top left back talent, Nelson is an interesting option and will fill in a team’s void early in this draft. He’s a solid 1v1 defender and combines well with teammates in the attack.

7. ​JJ Williams** ​(Kentucky) – Williams, a ​College Soccer News First Team All-American, gained notoriety this season as he led Kentucky to an impressive 19-2-1 record. The Alabama native has a well-rounded game and with a solid showing at the combine, could work his way into the top five.

8. ​Rashid Nuhu​ (Fordham) – Nuhu, arguably the top GK prospect in the draft, has the athleticism and shot stopping ability to thrive in this league. The Right to Dream Academy product has the best feet out of any GK in this draft and is expected to be a 1st round pick.

9. Santiago Patino (FIU) – Patino, an Orlando City HG candidate, is one of the most complete forwards in this draft. He's an impressive goal scorer and has the ability to get in behind or combine with his teammates. Expect him to be one of the first seniors off the board.

10. ​Tate Schmitt​ (Louisville) – The Cardinals forward could be one of most underrated players in this draft. Schmitt has an excellent work rate to go along with his technical ability and goal scoring prowess.

11 ​David Egbo​** (Akron) – The Nigerian born forward, helped lead the Zips to a College Cup final in part due to his stellar hold up play and attention he commanded up front. If offered a GA contract, Egbo will be a player who likely needs time in USL, but has the potential to be a productive forward in MLS.

12. ​Griffin Dorsey​** (Indiana) – The U.S U-20 midfielder is capable of playing on the wing or centrally and while he didn’t perform his best at the Concacaf U20 Championship, he’s performed well enough with the Hoosiers to earn a GA contract offer.

13. ​Kamal Miller​ (Syracuse) – The Canadian born defender can play as an outside back or center back. With a good showing at the MLS Combine, expect Miller to be one of the first defenders off the board.

14. ​Alex Comsia​ (North Carolina) – Comsia, the ACC Defender of the Year, may be the most MLS ready defender in this draft. The Canadian youth national teamer’s positioning and ability to snuff out attacks has been a major part of UNC’s success over the past four years.

15. ​James Pyle​ (North Carolina) – Pyle, the second GK on the list and a 1st team All-ACC honoree projects as a long-term MLS player. His shot-stopping and positioning are among the best in this year’s draft.

16. ​Tucker Bone​ (Air Force) – Bone, a box-to-box center midfielder has a great ability to win loose balls and play penetrating passes to open up a midfield. He’s one of the more complete midfielders in this draft, but may lack the upside some teams are seeking.

17. ​Tanner Beason​ (Stanford) – Beason, the PAC-12 Defensive Player of the Year and ​College Soccer News First Team All-American, has shown his ability to be a difference maker and leader in big games, and will certainly be a first round pick.

18. ​Callum Montgomery​ (Charlotte) – Montgomery, a towering center back, is a physical presence in the air, who’s improved greatly on his ability to play balls out of the backline. Expect Montgomery to be one of the first defenders off the board.

19. ​Abdi Mohamed​ (Akron) – Mohamed, an Ohio State transfer, was a tremendous addition in the Zips run to the College Cup. A former midfielder, Mohamed, has been converted to a right back, where he finds his best chance of success at the next level.

20. ​Amir Bashti ​(Stanford) – A San Jose Earthquakes Homegrown eligible player, Bashti, is an offensive weapon who can play anywhere in the midfield or up front.

21. ​James Pyle​ (North Carolina) – Pyle, the second GK on the list and a  First Team All-ACC honoree projects as a long-term MLS player. His shot-stopping and distribution are among the best in this draft.

22. ​Sergio Rivas​ (Seattle) – Rivas, one of the best true playmakers in this draft, will find the same issues making an MLS roster as many prior #10s have from college. With that said, if Rivas can show his ability to play both sides of the ball, he could be one of the steals from this draft.

23. ​Akeem Ward​ (Creighton) – The Bluejays outside back reads the game exceptionally and is competent in the attack. Ward is a bit of an underrated prospect, but his ability to play on either wing, should help his case.

24. ​Colin Miller​ (Providence) – Miller, a 6’3” shot stopper, has shown an ability to dominate his box and make big saves. The Friars captain could use a solid showing at the MLS Combine, to further elevate his draft stock.

25. ​Marcello Borges​ (Michigan) – A New York Red Bull Homegrown candidate, Borges, remains as one of the draft’s premier left back players. His ability to maintain possession under pressure and provide good service in the box will make him an appealing prospect.

25. ​Amar Sejdic ​(Maryland) – Sejdic, a well-rounded midfielder, capped his Terrapin career with a National Championship and College Cup MVP. Sejdic has shown improvement on the defensive end throughout his career, while his on-ball talent has never been questioned. With a positive showing at the combine, Sejdic could work his way up the draft boards.