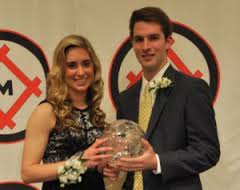 Patrick Mullins is celebrating the second MAC Hermann Trophy of his career, as the Maryland senior was handed the award on Friday January 10 for the second year in a row.

Mullins was also given the honor as a junior in 2012, and joins a select group of players to have taken the Trophy in two consecutive years.

Al Trost, Mike Seerey and Mike Fisher are the only other men to win the Hermann two years in a row, while Christine Sinclair, Cindy Parlow Cone and Mia Hamm have done so on the women’s side.

With Mullins now on the cusp of a professional soccer career, with the MLS SuperDraft beckoning next week, let’s take a look at the previous two-time winners of the Hermann and see where their careers went after receiving this prestigious award.

The Hermann Trophy was first awarded in 1967, and Trost won the award in both 1969 and 1970 as he helped the Billikins to the NCAA Championship in both years.

Oddly, Trost was only named as a First Team All-American in 1970, but the Hermann was one of a number of awards he won in a glittering college career.

After graduating from St. Louis, the midfielder chose not to turn professional so that he could be eligible for the 1972 Olympic Games in Munich, for which the United States began their qualifying campaign in 1971.

Trost was a key member of the side, playing eight of their 11 games and scoring against Barbados and El Salvador as the US reached the final tournament in Germany.

The following year, Trost played in two games as the Americans finished bottom of Group A and crashed out in the first round, but he continued his international career after turning professional.

He made 14 appearances for the national team, scoring on his debut against Poland in 1973 and captaining the side through their unsuccessful World Cup qualifying campaigns for the 1974 and 1978 World Cups.

Meanwhile, Trost began playing professionally in the North American Soccer League (NASL) with the St. Louis Stars in 1973, and stayed with them even as they moved to Anaheim and became the California Surf in 1978.

However, Trost was traded to the Seattle Sounders and spent the 1979 season with the Sounders before leaving for the Major Indoor Soccer League, where he played a single year for the New York Arrows.

However, in 1981 Trost was hired to coach the St. Louis Steamers, who he led to the 1981-82 MISL Championship where they lost to the Arrows.

He was fired by the Steamers in 1983, and has since spent time coaching at the high school level in Missouri, being inducted into the St. Louis University Athletics Hall of Fame in 1994 and the National Soccer Hall of Fame in 2006, capping what was a successful and varied soccer career.

Mike Seerey was a four-year starter for the Billikins, winning the NCAA Championship with St. Louis on three occasions and the Hermann Trophy in the two subsequent years after Trost was handed the award.

After graduating, Seerey was a member of the 1972 United States Olympic team, having started playing for the US in 1971 when still at college.

It was an unsuccessful campaign in Munich for the United States, but Seerey played every minute of their first two games against Morocco and Malaysia.

Following the Olympics, Seerey went professional and was signed by the Miami Toros of the NASL in the 1973 draft with the second overall selection.

However, he could not rediscover his scoring touch with the Toros, scoring just three goals all year before moving to the St. Louis Stars.

In three years with the Stars, Seerey scored just once and retired after the 1976 season.

He now works as an Area Sales Manager for the McLane Company in the St. Louis area, having also operated his own wholesale snack and concessions supplier in the 1990s.

The last man before Mullins to win the Hermann Trophy two years in a row, Mike Fisher was an excellent student-athlete who performed well both on and off the field.

He helped the Cavaliers to the NCAA Championship in 1993 and 1994, and was rewarded for his star play with the Hermann Trophy in 1995 and 1996 to cap off a highly successful college career.

Fisher still holds the record for the most career points and assists for Virginia, and was expected to make the step up to the professional game and flourish in the new Major League Soccer.

However, he began to lose interest in soccer, and having spent the spring semester training with the United States Olympic team for the 1996 games in Atlanta, he decided instead to pursue a medical career after coach Bruce Arena only named him as an alternate.

Fisher was selected second overall in the 1997 MLS College Draft by the Tampa Bay Mutiny but rejected the offer and instead enrolled at the University of Virginia School of Medicine.

He played briefly for the Roanoke Wrath in the United States Interregional Soccer League D-3 Pro League, but has not played since despite being named in Soccer America’s College Team of the Century alongside fellow Cavaliers Erik Imler and Claudio Reyna.

Fisher is now a radiologist with Delaney Radiologists in North Carolina, having completed a residency and fellowship at Duke University.

One of the most celebrated female soccer players in the history of the game, Mia Hamm looked destined for greatness when she helped North Carolina win the NCAA Championship four times in five years, missing their 1991 victory to play in the FIFA Women’s World Cup.

Hamm graduated having tasted defeat on just one occasion in her 95 games for the Tar Heels, and received the Hermann Trophy in 1992 and 1993, as well as being named ACC Female Athlete of the Year in 1993 and 1994 among numerous individual honors.

She represented the United States in three World Cups and two Olympic Games, winning the World Cup and gold medal on two occasions each.

Hamm finished her international career having made 275 appearances and scored 158 goals, the most for any male or female player in the international game. That record was broken in 2013 by Abby Wambach, another United States female international.

Unfortunately, there was no fully professional soccer league in the United States for much of Hamm’s career, although in 2001 she played in the newly-established Women’s United Soccer Association for the Washington Freedom.

The league may have only lasted until 2003, but Hamm was victorious with the Freedom in the last season, winning the Founders Cup over the Atlanta Beat.

Since retiring in 2004, Hamm was inducted into the National Soccer Hall of Fame, having also been included in the FIFA 100 listing 125 of the greatest living soccer players.

Last year, she was inducted into the World Football Hall of Fame, and is regarded as one of the greatest female soccer players ever to have played the game.

In her time with the North Carolina Tar Heels, Cindy Parlow Cone was an All-American four times and won the NCAA Championship on three occasions. She also became the second woman to win consecutive Hermann Trophies in 1997 and 1998, after fellow Tar Heel Mia Hamm.

After graduating, Parlow Cone was part of two Women’s World Cup squads for the United States, winning the title in 1999 and finishing third in 2003.

She also won two gold medals and a silver as part of three Olympic squads for the United States, who won the tournament in Atlanta in 1996 and Athens in 2004, sandwiching a second-place finish in Sydney in 2000.

Parlow Cone concluded her international career in 2006, having scored 75 goals in 158 appearances for the US national team, explaining her decision to retire was due to post-concussion syndrome.

In addition to her stellar international tenure, she also spent three seasons with the Atlanta Beat in the Women’s United Soccer Association, helping them reach the playoffs each year before the league folded in 2003.

Parlow Cone recently resigned her postion as Head Coach of the Portland Thorns in the National Women’s Soccer League, the newest women’s professional league. The Thorns finished third during the regular season and went on to win the NWSL playoffs with a 2-0 win over the Western New York Flash.

The last player to win the Hermann in consecutive years before Mullins, Christine Sinclair was an enormous success at Portland in her four years with the Pilots, helping them to the NCAA Championship in 2002 and 2005.

She was awarded the Hermann Trophy in 2004 and 2005, with the latter coming after a record-breaking goal haul of 39, the most all-time in Division I.

Sinclair was first selected by the Canada women’s national team in 2000, and since then she has made 203 appearances and scored 147 goals, remaining a key part of their side.

She spent one year with the Flash, scoring 10 goals in 15 games, and when the NWSL was formed in 2013 she joined the Portland Thorns.

Alongside United States forward Alex Morgan, Sinclair forms one of the top combinations up-front in the women’s game and helped the Thorns to the NWSL Championship in its inaugural year.

The newest player to win the Hermann in two consecutive years, the sky would appear to be the limit for Patrick Mullins.

Sure to go down as one of the best players in the history of Maryland men’s soccer, he is primed for a long professional career and has the potential to continue to improve.

A forward who has retained the happy knack of scoring goals, he may well be the first overall selection in the MLS SuperDraft on Thursday January 16, with D.C. United currently holding that pick.

He may be unproven at the professional level, but given the successes of previous two-time winners of the Hermann, Mullins is in a better position than most to enjoy a long and fruitful career at the top level.

Chris Teale is a contributing writer for College Soccer News.  He can be reached via e-mail at chris.teale@gmail.com or Twitter @chris_teale