NCAA Women’s Soccer: What You Need To Know

So did a Team USA victory in the Women’s World Cup this summer get you pumped up for the college season to start? Well, the wait is almost over — the 2015 NCAA Division I Women’s Soccer season opens Friday, Aug. 21.

While you count down the minutes until kickoff, brush up on the teams and players you need to watch in 2015.

STREAKING INTO 2015: Top-ranked Florida State, the defending NCAA champion, may have lost their top scorer and a standout defender from 2014, but that doesn’t mean they aren’t primed to make another run at another title. The Seminoles return eight starters from a squad that is riding a 21-game unbeaten streak into their season-opening contest at New Mexico Friday. FSU boasts a veteran squad that includes five seniors — three of whom earned spots on the 11-member Preseason All-ACC team: Megan Campbell (2 G, 12 A), Isabella Schmid (2 G, 6 A) and Cheyna Williams (14 G, 6 A). Plus, the Seminoles return goalkeeper Cassie Miller (0.36 GAA), who played every minute of her freshman campaign and anchored a defense that held foes scoreless in six NCAA postseason games last year.

NOT JUST THE ‘NOLES: While Florida State is the hands down choice as the preseason No. 1 in the polls, three other Atlantic Coast Conference teams join the Seminoles in the Top 10 — No. 2 Virginia, No. 7 North Carolina and No. 9 Notre Dame. The Cavaliers, who were the 2014 NCAA runner-up, are loaded once again with nine starters returning. While Virginia lost a couple stars from last year’s squad (remember two-time MAC Hermann Trophy winner and U.S. National Team member Morgan Brian?), the Cavs aren’t hurting with All-Americans Makenzy Doniak(20 G, 51 points) and Emily Sonnett (Most Outstanding Defensive Player at 2014 College Cup) back this season. You can never count out perennially greats like UNC and Notre Dame, and teams like No. 13 Virginia Tech and No. 22 Clemson can give any ACC coach plenty to worry about.

PAC-12 POWERS: It’s no surprise No. 3 Stanford and No. 4 UCLA are neck-and-neck in both the preseason national polls. Stanford, the favorite in the preseason Pac-12 coaches poll, have advanced to the Women’s College Cup in six of the last seven years, and while the Bruins missed out on a trip to the NCAA semifinals they did win the Pac-12 title in 2014. The difference, you ask? UCLA lost its entire backline and goalkeeper from last year’s squad that led the nation in goals against average. And, Stanford welcomes back junior goalkeeper Jane Campbell, who posted 14 shutouts and a 0.59 GAA last season. Yes, defense really does win championships — at least in the preseason.

UP FOR GRABS: Texas A&M made its mark on NCAA history last season as the No. 4 Aggies advanced to their first-ever College Cup, but the defending Southeastern Conference champions lost a lot from that senior-laden team. The Aggies return only three starters, including Janae Cousineau, who is the squad’s top returning scorer with 6 goals and 2 assists last season. No. 8 Florida, the coaches’ preseason favorite, welcome back six starters, including SEC-leading scorer Savannah Jordan (19 G, 46 points) and defenders Claire Falknor and Christen Westphal. All three were members of the U.S. U-23 National Team that won the Four Nation’s Tournament last spring. But you can’t have a conversation about the SEC this year without talking about No. 11 South Carolina. The Gamecocks are coming off an NCAA quarterfinal appearance and return 25 letterwinners, including their top five goal scorers. If goalkeeper Abbey Crider can build off a fabulous finish to her rookie year (when she took over the starting job from an injured All-American Sabrina D’Angelo and led the team to the Elite Eight), the Gamecocks may turn a few more heads this year.

WORLD-CLASS MOUNTAINEERS: West Virginia juniors Kadesiha Buchanan and Ashley Lawrence’s summer adventure is one that will surely help the No. 12 Mountaineers raise their game this season. The two were starters on Canada’s Women’s National Team at the 2015 FIFA Women’s World Cup, which their home country happened to be hosting. With their help, Canada advanced to the knockout stage for just the second time. Buchanan was named Best Young Player and featured on a Canadian commemorative stamp, and Lawrence scored the team’s lone goal in a 1-1 draw against The Netherlands in Group A play. Now, back in West Virginia, the duo will try to keep the Mountaineers’ momentum going — WVU enters the season on a 19-game unbeaten streak. The program has not lost a match since dropping a 2-0 decision to Duke on Aug. 29, 2014.

BIG TEN BATTLE?: While No. 6 Penn State was voted the Big Ten preseason favorite by the coaches — as the Nittany Lions have been every year since 2003 — No. 14 Wisconsin is certainly a team to watch. The Badgers, who won the league’s tournament title and posted a program-record 19 wins in 2014, return All-America midfielder Rose Lavelle — the team leader with 10 assists last season. Lavelle contributed a goal and three assists to the U.S. U-23 National Team’s victory at the Four Nations Tournament in Norway last spring. 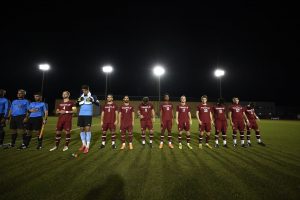 The Upcoming Spring 2021 SEason. Keep An Eye on these men’s college soccer Teams. 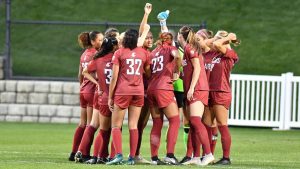